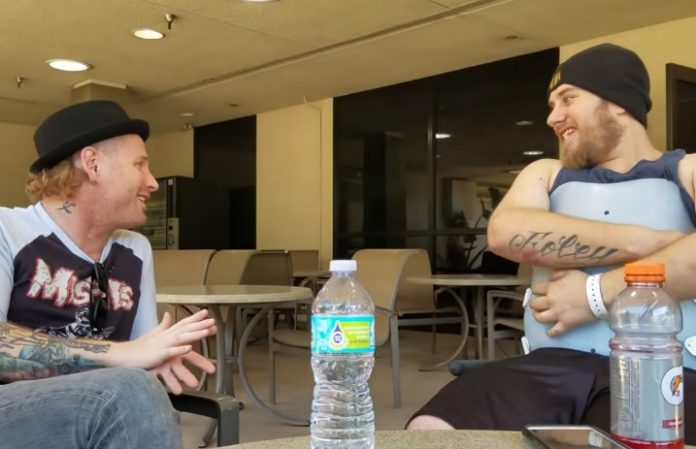 Corey Taylor of Slipknot and Stone Sour recently paid a visit to a long-time fan, Aaron Foley, at the hospital after an accident that left him severely injured and paralyzed from the waist down.

Watch their touching conversation below.

According to a letter written by Aaron Foley's family posted along with the video, on May 15, Foley had answered a call from a friend who was in a motorcycle accident and rushed over to help. After successfully getting the friend to safey, Foley tried to cross the road but was struck by a pickup truck speeding down the shoulder. The accident fractured many of Aaron's ribs, collapsed his lungs, lacerated his liver and injured his spine, leaving Foley paralyzed.

Foley is a dedicated fan of Taylor's work in Slipknot, Stone Sour and other ventures, and had actually met Taylor three times prior, and even appeared in Stone Sour's music video for “Fabuless.” Foley's mom, with the help of their local San Diego radio station, Rock 105.3, organized a personal visit between Foley and Taylor in the hospital to lift his spirits. Check out the amazing full video below.

“We can’t thank Corey Taylor enough to take time out of his busy day on tour with Stone Sour to visit Aaron. And we would also like to thank the Crew and Management at Rock 105.3 for helping set this up and helping contact Corey to make it all come together.

We thank everyone for their support, and if you would like to contribute to Aaron’s GoFundMe, please visit [here].”

This video is a refreshing chance of pace after a rough week for Taylor, who has been involved in a comment feud with Nickelback's Chad Kroeger after Kroeger referred to Stone Sour as “Nickelback light,” to which Taylor responded that Kroeger has “a face like a foot” and other hilariously rude comments. Whoever's side you're on, it's nice to see such a heartwarming side of Taylor.