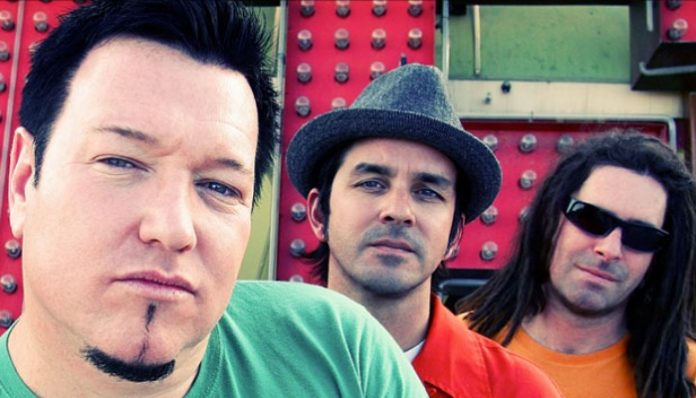 Smash Mouth has decided to start some beef with Drake over the NBA Finals for some reason, and it’s actually pretty entertaining.

For some background, the Raptors are heading to the finals for the first time in the team’s history. They will play the Golden State Warriors. Fans of the Toronto team, including Drake, were obviously excited for the achievement.

The rapper frequently sits courtside during the team’s games, which he did during the Eastern Conference Finals game that the team took the win. He made the news when he was moving around a lot while the game was in play, and he briefly rubbed shoulders with Raptors’ coach Nick Nurse.

The rapper defended himself, saying that his actions could not have affected the outcome of the game.

This is where Smash Mouth comes in. The Bay Area natives were not big fans of the rapper’s actions and decided to come at him on Twitter.

Yo @drake When the ball is in-play sit the FCK down! That aint gonna fly in Oakland! #GlorifiedMascot  @warriors @Raptors @NBA @E40

Drake has yet to respond to the beef, but Smash Mouth doesn’t seem like they are playing around.

In other news, earlier this year, some twisted person decided to make a hotline and have it play Smash Mouth’s “All Star” and nothing else. The phone doesn’t even ring — It just goes straight into the song with no time to fully prepare.

Unfortunately, if you want to listen to the full song, you’ll have to look elsewhere. The call disconnects itself after about a minute and 30 seconds.

According to a tweet, the mastermind behind the hotline says that the phone number received over 100,000 calls earlier this week.

The phone # I wired up to do nothing but play Smashmouth’s “All Star” received 100k calls last night. Y’all are crazy + the internet is a strange, wonderful place. pic.twitter.com/1mkBHKJ3fk

Additionally, according to iHeartRadio, people can text the number to receive a link that will direct you to lyrics for the song.

You can listen to the full version of Smash Mouth’s “All Star” below.

Are you on Smash Mouth or Drake’s side in this strange beef? Sound off in the comments below!