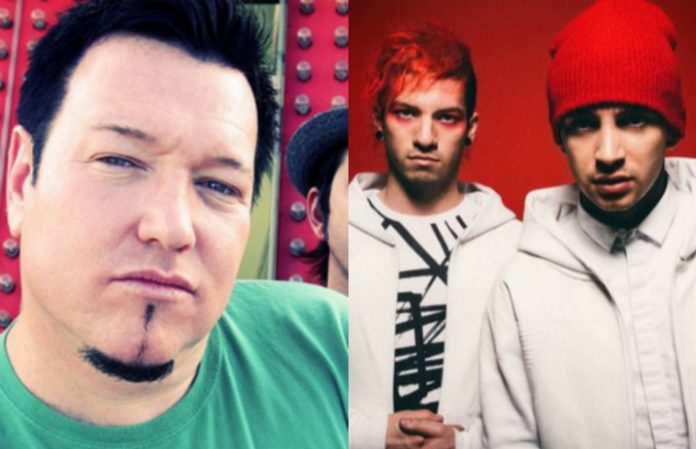 Looks like Smash Mouth just got themselves embroiled in an unexpected controversy with twenty one pilots fans. But honestly, does anything surprise us anymore?

Here's what's going down: It all started when a fan asked if Smash Mouth liked twenty one pilots, and Smash Mouth responded in the affirmative, along with “And Tyler isn't done!” Whoever is running Smash Mouth's Twitter is insistent on the fact that twenty one pilots vocalist Tyler Joseph is the musical mastermind of the band, while drummer Josh Dun is just that—a drummer.

And while this isn't necessarily untrue—a quick Google will tell you that Joseph is the sole composer behind the band's biggest hits—both Smash Mouth and the fans have taken up arms to prove their points. (Seriously—so many tweets.) Some examples:

One of the best acts EVER! In the history of music POINT BLANK! And Tyler isn't done!

in regards to more hit songs. Tyler writes their songs. Not a diss on Josh.

Writing,…. If you look up the Credz Tyler writes everything. That's the only point we've made. It's not an opinion, it's a fact.

There's a difference with performing and creating songs. Josh is an amazing performer! Tyler is a songwriting genius. Genius=rare

accept he gets ZERO legal credit for creating the songs and btw you're clueless. Drums are demoed before Josh lays his down.

Although, honestly, both parties seem like they're fighting pretty noble battles. Fans just want Smash Mouth to give Dun the recognition he deserves, and although the band are dead set on Joseph being the genius behind twenty one pilots, they still seem to like Dun enough:

Yup Josh is a stud!

Writing gurus don't grow on trees. Josh is amazing at what he does, all good.

Yes Josh's hard precise sharp playing is perfect for the band. He was great in HouseOfHeroes.

…The world is a strange place. Thoughts on maybe the weirdest beef of all time? Let us know in the comments!