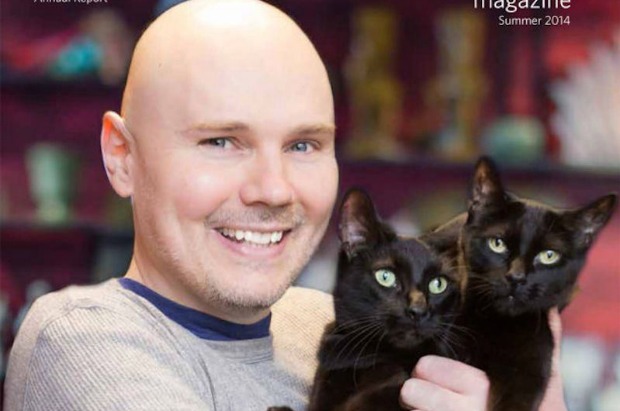 Earlier this year, Smashing Pumpkins frontman Billy Corgan appeared on the cover of the animal magazine, PAWS Chicago, an annual issue distributed by the adoption center/no-kill organization of the same name. Corgan is featured on the cover with his two cats—Sammi and Mr. Thom—who were both adopted from PAWS. The singer has been a big supporter of the organization in the past, having raised over $100,000 for them.

Seems harmless, right? News anchor Anderson Cooper sure didn't think so, as he called Corgan out on his show, Anderson Cooper 360°. Rolling Stone reported that Cooper put the Smashing Pumpkins frontman on blast, saying, “So perhaps Billy Corgan is I don’t know, off his alternative rocker, but I think maybe there’s more to this. Maybe he’s being ironic, or maybe when the cool rock stars start doing less rock starry things, it kind of makes us face our own mortality.”

He later goes on to state, “Maybe the Internet is the real problem here. There was a time when nobody outside of Chicago would have ever seen the cover of PAWS Chicago magazine.” Watch the segment below.

Corgan initially responded to the blasting with these two tweets:

@andersoncooper Sorry to disappoint, but when I'm not raising cain for a great organization like @PAWSchicago, I'm still making REAL music

@andersoncooper I realize you're too busy being a globalist shill to know the difference, but there are those of us who do as we like

So there you have it: Smashing Pumpkins are now selling “F*ck You Anderson Cooper” shirts that feature Billy Corgan’s cats in bowties. What are your thoughts on this bizarre situation?