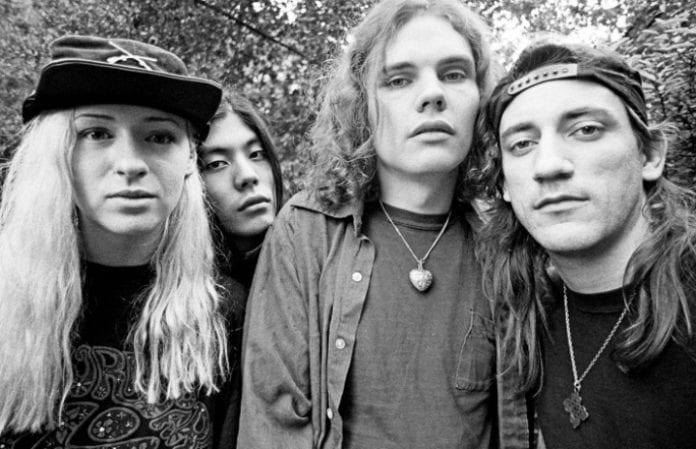 Is a Smashing Pumpkins reunion (specifically, of the band's classic '90s lineup) imminent? Pumpkins drummer Jimmy Chamberlin says that reunion talks are underway among the group's original members, according to TeamRock.com.

As interviewed by WGN Radio, Chamberlin says, “We were talking about playing next year with the band and somebody asked me, you know, 'What's it like trying to coordinate that?' I said it's like Grumpy Old Men 3, only there's four grumpy old men and one's a woman… So, that's how it's gotten to be.”

It's assumed that Chamberlin is referring to the Pumpkins' classic lineup featuring himself, frontman Billy Corgan, guitarist James Iha, and bassist D'arcy Wretzky. Wretzky hasn't played with the band since 1999, though it's said that she and Corgan are now on good terms—SPIN reported last August that the two had reconciled. Iha, who left the group in 2000, surprisingly sat in with the band last year, further setting the stage for a full-scale Pumpkins reunion.

Chamberlin himself has been in and out of the Pumpkins over the years, most prominently being replaced by drummer Mike Byrne from 2009 until 2014, but as of last year is playing with Corgan and company again in a touring capacity.

“Musically, we've never been at odds,” Chamberlin says of his relationship with Corgan. “Since 1988, I don't think Billy and I have ever argued about music. Our musical relationship is that intact. This music has an extremely high value to me—it's an extremely big part of my life. Do I want to go celebrate that music? Hell, yeah. Do I want to potentially record some more music? Hell, yeah.”

“When Billy and I get together, amazing things happen,” Chamberlin continues. “We've written some of the greatest rock songs of all time.”

Smashing Pumpkins have released four studio albums since the original lineup's 2000 breakup and Corgan's 2006 reformation of the band without Iha and Wretzky: Zeitgeist (2007), the onging Teargarden By Kaleidyscope project, Oceania (2012), and Monuments To An Elegy (2014). Since 2007, the only Pumpkins mainstay besides Corgan has been guitarist Jeff Schroeder, who replaced Iha. It's unclear if Schroeder will be continuing with the band.

Corgan has yet to comment on Chamberlain's new remarks about a probable Pumpkins reunion, but the singer did hint at the possibility himself earlier this year, telling Chicago station 97.9 The Loop, “There's a willingness for us to play, but also the world's changed a lot since we didn't play. So the reunion thing is always a bit weird because people come in with their expectations.” (via NME)

“If we're gonna do it, I think we [should] do it to make people happy and not go against the tide of what people would want to hear,” Corgan adds. “But my interest in it is sort of limited. I'm not gonna do it for, like, 14 years of my life.”

Would you be stoked on a classic Pumpkins lineup reunion? What's your favorite Smashing Pumpkins album? Let us know in the comments.