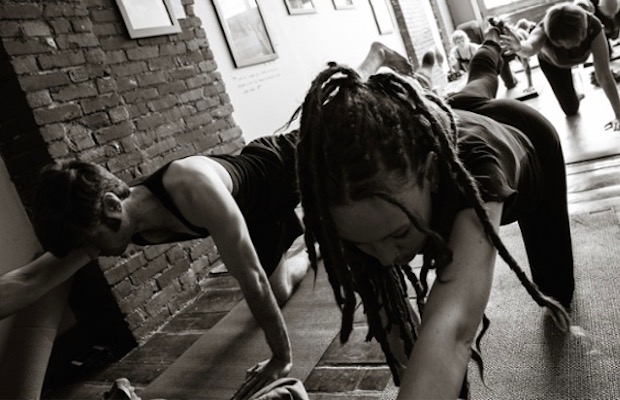 So, I guess metal yoga is a thing now. The Guardian recently ran an in-depth piece on the practice, interviewing Black Yoga founder Kimee Massie and Metal Yoga Bones’s Saskia Thode. “I had been teaching yoga in the regular studios and gyms for a couple of years, and I needed something to play in my classes that that would fit me and my personality (my own record collection is mostly Babes in Toyland and Sepultura),” explains Massie. “It wasn’t so much about being ‘metal’, that just kind of naturally creeped in there because of who I am and what I’m into.”

She later adds, “You can’t fully appreciate the light until you understand the darkness,” which is a very truthful point.

On the other end of the metal yoga spectrum, some of Saskia Thode's classes move things to the next level by kicking things off in front of the stage at New York metal venue Saint Vitus. “Metal yoga starts off with a lot of growling, screaming, and hitting the floor with our fists to give people a chance to release some of the anger, stress and the darkness inside. I also encourage people to move; if they like a song and like the beat, why not move with it?”

Well, there you have it. Is metal yoga something you'd be interested in trying?