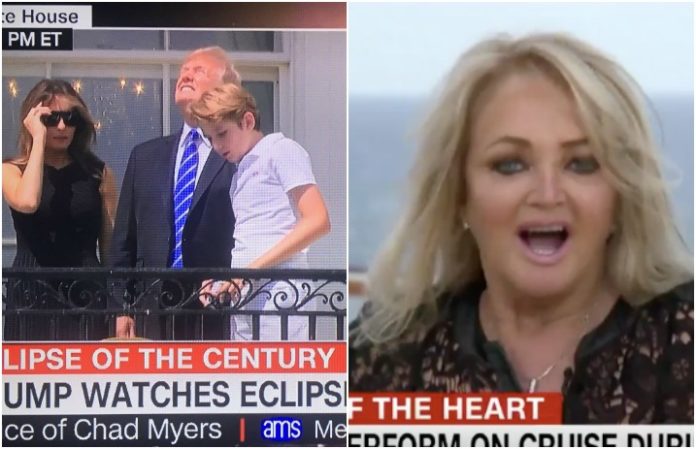 Ah, the Solar Eclipse is here, and, as if it should be a surprise, Bonnie Tyler’s hit “Total Eclipse Of The Heart” is the No. 1 song on iTunes at the moment. And, another non-surprise, President Trump was caught staring directly at the sun—and the internet has responded.

To celebrate the occasion, Tyler performed her hit on Royal Caribbean's Total Eclipse Cruise, just as the moon sailed across the sun, as Time reports. And we caught a glimpse of this truly once-in-a-lifetime performance on CNN.

We’re not sure what’s better: Her performance, or the fact that the news anchor pulled out a lighter.

It shouldn't come as a surprise, though: The song sold six million copies and had a 75% increase in streams on Spotify the day after last year's total solar eclipse in March, Time reports.

Not to mention, the internet has responded to President Trump's, er, staring at the sun moment:

Aaaaaand here's your photo of Trump looking straight at the eclipse pic.twitter.com/5vv6sVTDIl

It's okay Donny at least you can still listen to my band keep rockin man https://t.co/wsiDtFSkNa

Did you catch the eclipse today? Let us know in the comments below!