They'll head up the event's comedy and spoken word tent.

Tom Morello and Pussy Riot member Nadya are the latest headliners announced for Sonic Temple Art + Music Festival‘s SiriusXM Comedy & Spoken Word Tent, where speakers such as Henry Rollins and comedians including Pauly Shore and Andrew Dice Clay are scheduled to entertain at the new festival.

Rock On The Range’s co-creator Danny Wimmer Presents announced the new festival’s debut in September. The first-ever Sonic Temple goes off May 17-19 at MAPFRE Stadium in Columbus, Ohio.

And while speakers led by the aforementioned Rage Against The Machine guitarist ignite social activism and spread comedic cheer in the spoken word tent, big names such as System Of A Down, Foo Fighters, Disturbed and Bring Me The Horizon will light it up onstage as the music acts.

In addition to the previously mentioned bands, other scheduled musical performers include Ghost, Halestorm, Lamb of God, Beartooth, Architects, Bad Wolves, Fever 333, Basement, The Black Dahlia Murder, Don Broco, Wage War, Hands Like Houses, While She Sleeps, Palaye Royale, Movements, Amigo The Devil, The Plot In You, Boston Manor, COUNTERFEIT, Teenage Wrist, Joan Jett And The Blackhearts, and the Cult. 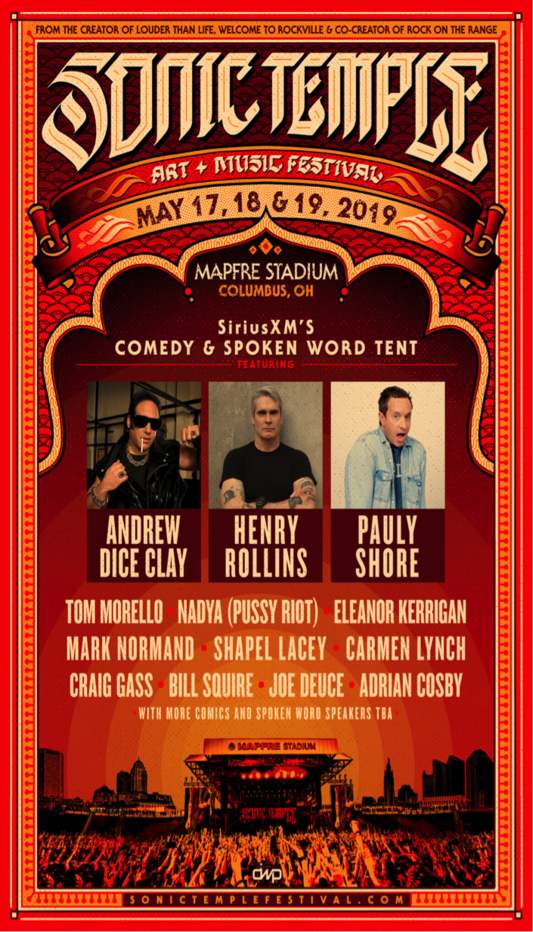 On the ocassion of Sonic Temple’s initial lineup announcement last year, festival promoter Danny Wimmer of Danny Wimmer Presents spoke about the new event’s significance in light of the longtime Rock On The Range festival’s demise.

“I am so proud of what we accomplished with Rock On The Range, and with the debut of Sonic Temple Art + Music Festival, we’re excited to bring our devoted rock fans and the city of Columbus a one-of-a-kind, world-class event that expands on the festival experience,” he said. “The idea behind Sonic Temple is walking into something bigger than yourself, where YOU belong, or where you were always meant to be. The crowd is unparalleled, and the energy is electrifying, like going to a place of worship. We want this festival to be a temple of rock n’ roll. We want this to be the ultimate rock experience for the true fans who love the genre as much as we do.”

Will you be attending Sonic Temple? Sound off below!