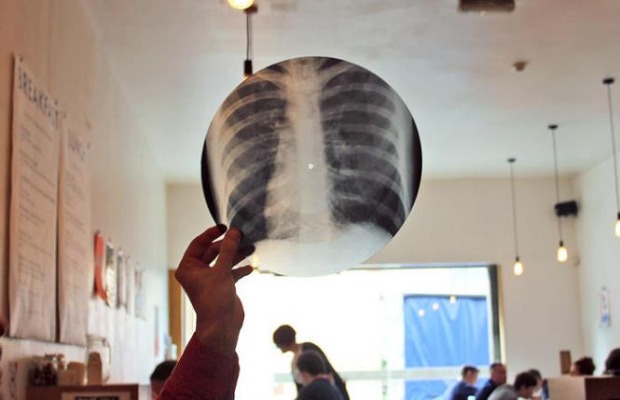 It’s already pretty well known that the communist regime of the Soviet Union was extremely anti-Western music. There’s even a massive list of bands that were banned by the Soviet Union during the Cold War.

But according to FastCoDesign (h/t Consequence Of Sound), there were a group of Russians called “Stilyagi” (basically hipsters) who distributed bootlegs in a very clever, sneaky way: They pressed records on used X-Rays from hospital dumpsters.

This all lasted until 1958, when the government caught on and made the “bone music” illegal. Naturally, the records had pretty low quality but were cheap to produce. Read more from FastCoDesign:

“These records only played on a single side, and the quality was low, but they were extremely cheap: A single disc only cost about one ruble on the black market, as opposed to five rubles for a two sided-disc. And it was subversive. According to Artemy Troitsky’s 1987 book Back in the USSR: The True Story of Rock in Russia, they often contained surprises for the listener: “Let’s say, a few seconds of American rock’n’roll, then a mocking voice in Russian asking: “So, thought you’d take a listen to the latest sounds, eh?” followed by a few choice epithets addressed to fans of stylish rhythms, then silence.”

Soon, an entire underground network of bone music record distributors popped up, called the roentgenizdat, or X-Ray press. Analogous to the samizdat that reproduced censored publications across the Soviet bloc, the roentgenizdat was soon distributing millions of Western records.”

You can see more pictures of the records and read the entire pierce here. The process of making bone music was captured in the opening credits of a 2008 Russian film: