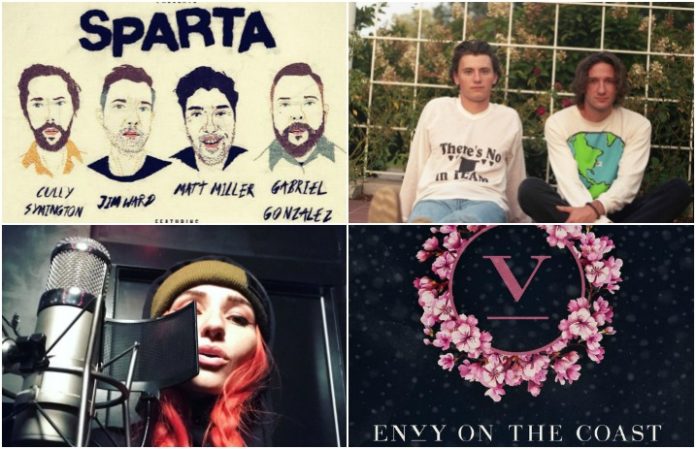 Can't Swim are hitting the road with Envy On The Coast and the Amity Affliction are streaming their Silverchair cover! Check out all of this and more you might have missed today, below.

El Paso natives Sparta will be holding a free concert for fans at Tricky Falls in El Paso on Dec 16. Donations from the concert will go to benefit the El Paso Community Foundation. “I'm excited to continue working with The El Paso Community Foundation to use live music, which I love dearly, to raise money for our community” says Sparta member Jim Ward. “Our hope is to continue developing a program that balances music and charity to benefit multiple areas of need in the El Paso/Juarez area,”

2. Can't Swim hit the road with Envy On The Coast

Can't Swim have announced they will be hitting the road with Envy On The Coast and Rare Futures next month. You can purchase tickets here.

EAST COAST: We’re very excited to announce that we’ll be playing some shows with @EnvyOnTheCoast and @RareFutures in December. Tickets are available now at https://t.co/NSnwN0Mhow pic.twitter.com/sOPyLXKhBT

3. The Amity Affliction stream their cover of Silverchair's “Tomorrow”

The Amity Affliction are now streaming their cover of “Tomorrow” coming off the Silverchair tribute album Spawn Again: A Tribute To Silverchair which is set to drop this Friday Nov 17. You can check out the incredible cover, below!

Super American have been added to Knuckle Puck's Buffalo show this Thursday, Nov 16. Grab your tickets while you still can!

we got added to the @KnucklePuckIL show in buffalo at VENU this thursday. tix online gang. cha cha pic.twitter.com/4QlWOKYquL

Lights took to Twitter to tease that she has now recorded “Giants” in four different languages! But which ones?! WE NEED TO KNOW!

Ya girl just recorded Giants in four languages �� guess which ones pic.twitter.com/v8ILbNh6BJ

Florida rock band Lydia Can't Breathe have unveiled their claymation video for the title track off their new album Tastes New. Check out the video below and purchase your copy of the album here.

Nu-Metal band Sharp Tongue have released a music video for their single “DEILD” coming off of the band's four track EP Petrichor. Watch the music video, below!