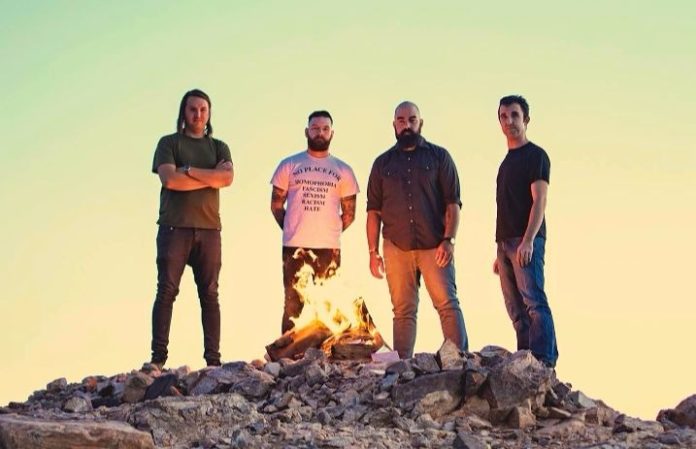 Speak The Truth… Even If Your Voice Shakes, the new supergroup from Senses Fail singer Buddy Nielsen and members of Finch, have dropped a powerful new song called “Drowning On The Sidewalk Or Dying Inside.” Hear it below.

As we previously reported, the band's debut album, Everyone You Love Will Slip Away From You, is out Nov. 10—pre-order it here. Last month, the group revealed a pair of debut singles, “Crash My Car” and “Go For The Throat.”

Nielsen describes “Drowning On The Sidewalk Or Dying Inside” as a lyrical return to a darker style, switching up the themes he explored on recent outings with his other band. “I spent the last two Senses Fail records writing really positive and emotional lyrics,” Nielsen says, “which was a big departure from all the other material I have worked on. In response to that, there were a lot of fans that were upset that I had suddenly changed tones on them.”

However, Nielsen acknowledges that the reoccurrence of moodier subject matter was prompted by a personal tragedy, and the vocalist crafted the “Drowning” lyric as a response to an extremely difficult situation.

“This song is a little tongue-in-cheek response to that,” says Nielsen of his fans' desire for more brooding motifs from the musician, “but it's also about the miscarriage my wife had. It is a conversation I'd like to have with my unborn child that, depending on what you believe, was either never alive or fully alive. Either way, it is my attempt at making peace with it, while also fulfilling people's wishes of writing songs from a darker, more depressing place.”

Nielsen says the new song is “sort of asking fans, 'Are you happy that I have suffered a tragedy so that you can now have more relatable lyrics?' But trying to do so in a humorous way, if that is at all possible.”

“That is why I chose one of the poppier songs to frame such a dark topic.”

STTEIYVS – “Drowning On The Sidewalk Or Dying Inside”