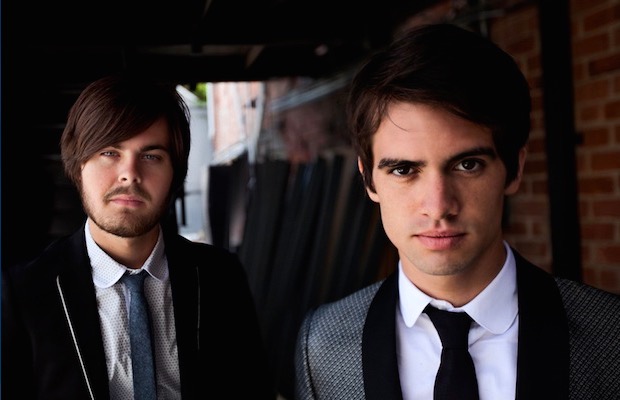 Panic! At The Disco drummer Spencer Smith has announced his official departure from the band, following his leave of absence in 2013 due to his battle with addiction.

Throughout his lengthy statement, he spoke on when drugs began to take ahold of his life, and how Panic! helped him through it: “A few years ago, when my addiction grabbed hold, and wouldn’t let go, they could have easily kicked me out, and never looked back, but they didn’t. Instead, they encouraged me to seek treatment, and gave me the time I needed to get my life back in order. They helped me through those rough times, and now, on the other side, with two years sobriety from prescription medication, and working on a year sobriety from alcohol, I am nothing but grateful for all they have done.”

In 2014, Brendon Urie spoke exclusively to AltPress on Smith's state at that time: “I talk to him periodically, but, honestly, I haven’t talked to him in a little bit. The last time I talked to him, he told me he was doing good. I guess the most you can do is take someone’s word for it. I think it’s going okay. I know when [he entered rehab] it was really tough for me even to have to admit, “Hey, this is crazy.” The fact that he took that step to do that is pretty amazing. Not a lot of people would do that; they would just give up at a certain point. But he was like, “No, no, no. I understand. I need to go. I need to get some help. I need to work on myself.” He’s continuing to do that.”

You can read Smith's full departure statement below.

To our fans…After 10 years of being a part of this unbelievable journey it saddens me to say that I will be leaving Panic. This was not an easy decision to come to, but after a lot of thinking it became clear that this is what’s right for me and the band. I love this band with all my heart, and getting to see it grow from 4 kids in my parents garage to what it is now has been incredible. I loved it all. But, at a certain point, I realized that I wasn’t able to be there for the band the way I wanted to be, and more importantly, the way they needed me to be. I consider myself extremely lucky to have been surrounded by the people I have been all these years. They truly are my best friends. A few years ago, when my addiction grabbed hold, and wouldn’t let go, they could have easily kicked me out, and never looked back, but they didn’t. Instead, they encouraged me to seek treatment, and gave me the time I needed to get my life back in order. They helped me through those rough times, and now, on the other side, with two years sobriety from prescription medication, and working on a year sobriety from alcohol, I am nothing but grateful for all they have done. It’s things like that that always made this band feel more like a family to me than anything else. When we were together in the studio or on stage I wasn’t with co workers at a job, I felt at home with my brothers. Looking back over the past decade I still have to pinch myself to believe it was all real. I still remember waiting all day to get out of school so we could go write songs, and record demos on a drum machine and a 30 dollar keyboard. I remember being so nervous when Pete came to town to watch us play the only 3 songs we had, and then going to Del Taco where he treated us to a well deserved meal (as any self respecting AnR guy should). I remember pulling all night triple shifts driving around the country in a conversion van with a single axle trailer on our first tour. Im going to miss it all. Staying up all night writing songs, and recording them over and over until my hands would bleed. Catching red eye flights to get to a photo shoot or video shoot, and being so delirious on set we never thought we’d stop laughing. Explaining to our manager that I wanted to perform on top of a ten foot tall carousel and have a caged tiger on stage, and being surprised when that didn’t seem “totally reasonable” to everyone else. I’m going to miss the good interviews, the bad interviews, and the interview in Germany when we were asked “your new album doesn’t seem to be as good as your last…why?”. Or being in rural China where I’m almost positive we were served horse, but we ate it anyway so we wouldn’t offend the women who spent all day cooking for us, and you know what, it was pretty good. Or the time we were stranded in a Russian airport for 20 hours, and the only thing that kept us sane were the funny pictures or videos of encouragement you would send us. All of those moments that made me want to say, “I’ve had enough, this is crazy, I quit!” those are some of my favorite memories now. But what will stick with me the most is showing up in city after city and finding more and more of you who had learned the lyrics to all our songs, or had made home made t-shirts with our faces surrounded in puff paint, or baked us cookies from your grandmas secret recipe and put a single hair in each one (ok, that one was a little creepy…creepy, but delicious). For me, that’s what made it all so surreal. Yes, getting to travel around the world with my friends was no doubt some of the best memories of my life, but it was what happened during that hour and a half on stage each night that was truly magic. And none of it was possible without you. Whether it was in front of 15 people at Brendon’s church social or 15,000 people in a field somewhere in England. What we created, the four of us onstage, and you in the audience, that was something special. It was on those nights I’d say to myself “If I could be anywhere in the world tonight, with anyone I wanted, it would be right here with you”. It’s what I’ll miss the most. So, thank you. I truly cannot wait to see what’s next for Panic, whatever it is, it’s going to be great.  From the bottom of my heart, thank you for giving me the life I only dreamed of 10 short years ago.