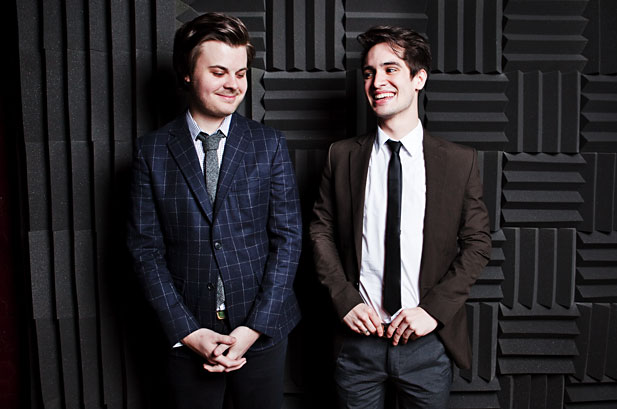 Panic! At The Disco's Spencer Smith will be sitting out the band's upcoming tour due to recent news of his battle with addiction. Singer Brendan Urie posted an open letter on the band's website concerning the topic. Read it on their website or check it out below:

“HI. I’M BRENDON URIE FROM PANIC! AT THE DISCO.
And my band has been through a lot.

From graduating high school to almost immediately getting an indie record deal. To having to become best friends with new acquaintances in the close quarters of a conversion-van whilst touring the country. To dealing with animosities inside and outside of the band. To dealing with “creative differences”. New band members joining. Old members quitting. And now this: one of my closest friends has been struggling with addiction.

I guess I never thought that last one would ever really be a “thing”. Ever. I figured if we ever got into drugs or partying that we would phase out just as quickly. And for a while, we seemed to do just that. Phase in and out of consciousness without worrying about future consequences; or, “future tripping”.

But over the course of the last 6 years or so, I’ve learned that not everybody deals with things the same.

I don’t know why that particular lesson took so long for me to learn. I mean, I’ve always understood that people are different and you can’t judge someone you don’t know because you haven’t walked a mile in their shoes and so forth. But when it happens to someone close to you whom you love and respect… It’s just a different story altogether.

I first joined this band (then under a different band name) as a replacement guitar player. Initially, I had no intentions of being a permanent member. I was just filling a space as a temporary solution to a not-so-serious problem. But within a couple month’s time, I was a lead singer of a growingly popular rock band out of Las Vegas. So, things were pretty damn good for a hyperactive high-school kid with sub-average grades and no plans for college.

My initial impression of Spencer was that of intrigue and curiosity. Most of the time he was quiet and reserved, but every now and then he would unleash his wit of which I was an immediate fan. We seemed to share the same brand of comedy which was a breath of fresh air to me. That initial connection became a fully-fledged friendship that would become stronger over the course of many years. And many fights. Many tears and many laughs.

Writing our first album together was so much fun. Even sometimes cutting class to work more hours for more pay at a smoothie hut just to make ends meet for gas bills and a rehearsal space couldn’t have been more fun to me. And when that album became popular, it was so completely surreal. My entire childhood was spent practicing for and dreaming about entertaining crowds of people. I lived to perform. To sing. To dance. To play music. And I was finally getting to fulfill my dream.

And through the years of changing sounds from one album to the next, of fighting over who should still be the lead singer, of being around people who were so completely done with being a band, I never gave up. I just showed up. And hoped that there were people like me who wanted to make a difference. People who wanted to create something. Because they needed to. Because if they didn’t, it would drive them insane. And luckily, I found people like that.

I guess what I’m saying is that Spencer and I have been through a lot of hurdles together, but witnessing one of my closest friends immersed in such a battle has been the most difficult. There was never anything I could say to comfort him or empathize with his situation. What the fuck could I possibly say to him to make him feel like everything was gonna be okay? So I told myself that all I could do was work even harder with whatever I was doing to make sure he didn’t have to stress about anything. So I did.

And I wrote as sincerely and honestly as I could for this album. I didn’t want to hold anything back. No one was telling me what I could and couldn’t say. This was my diary and the pages were filled with confessions. About everything. About my story. What I had gone through and what I was going through. I kept writing and never really stopped.

So, here’s another confession for my diary. Only this time there’s no musical soundscape or background in which I can flood the message. All I can do is say it. So here it is.

Today is August 6th 2013, and it’s become evident Spencer still needs more time to take care of himself. I can’t expect him to be fighting addiction one minute and be fully immersed in a national tour the next.

With all that said, the tour will continue without Spencer while he is away getting the help he needs. Thank you all for your support and kind words.

I love you. I believe in you. Just show up and don’t ever give up.