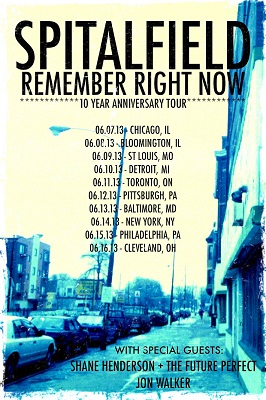 Chicago's Spitalfield will hit the road once again to commemorate the tenth anniversary of Remember Right Now, originally released on Victory Records. Tour support will come from Shane Henderson & The Future Perfect (Valencia) and Jon Walker (ex-Panic! at the Disco).

“In 2003, when our guitarist, Dan Lowder, suggested the name Remember Right Now for the record we were making – it just made sense,” explains singer/guitarist Mark Rose. “Everything in my life up until that point seemed like it was building towards something. Getting me closer & closer to something that would take me very far away. I'll never forget that feeling.  Growing up, playing in a band is all I ever really wanted to do. I am truly grateful that I was able to make that shift – to take that leap into the world of recording & touring. I'm very focused on the solo material I’ve been working on, and am very excited to keep pushing forward with it. That said, this tour couldn't have come at a better time, as I can't help but smile & get amped up thinking about getting in the van, hanging out, & playing some old familiar songs with some of my oldest friends.  If people show up to have some fun with us, that will just be a bonus.”