It’s coming sooner than you think.

Spotify users spend all year soaking up new artists and old favorites resulting in quite a diverse year summed up in the annual Spotify Wrapped.

While Apple has already revealed its Apple Music Replay that breaks down your top tracks by year, Spotify listeners have been waiting for the highly anticipated year-end recap. Now it looks like we don’t have much longer to wait.

Spotify Wrapped takes you through your year in music. Once connected to your account, you’ll get to discover your most-streamed artists, songs and genres. Past wrap-ups have given you how many minutes you listened to music, which star sign you listened to the most and your Top 100 songs of the year.

Last year, Spotify Wrapped made its debut on Thursday, Dec. 6. In 2017, the year-end wrap-up launched Tuesday, Dec. 5. With this in mind, the 2019 roundup is likely to launch this week.

Read more: Spotify users listened to their favorite bands this much in 2018

Spotify confirmed that theory by posting it’s “almost ready to be revealed.” With it, however, they ask followed to like the tweet to get reminded when the feature will launch.

Your year in music is almost ready to be revealed! pic.twitter.com/9g5B62zXQk

Spotify also took to Instagram to tease Wrapped is on the way by saying it’s “coming.” With the continued anticipation, the music streaming platform also shared a story slide asking followers to predict their own Wrapped. Grab the blank slide for yourself below and keep posted to the Spotify Wrapped 2019 site here. 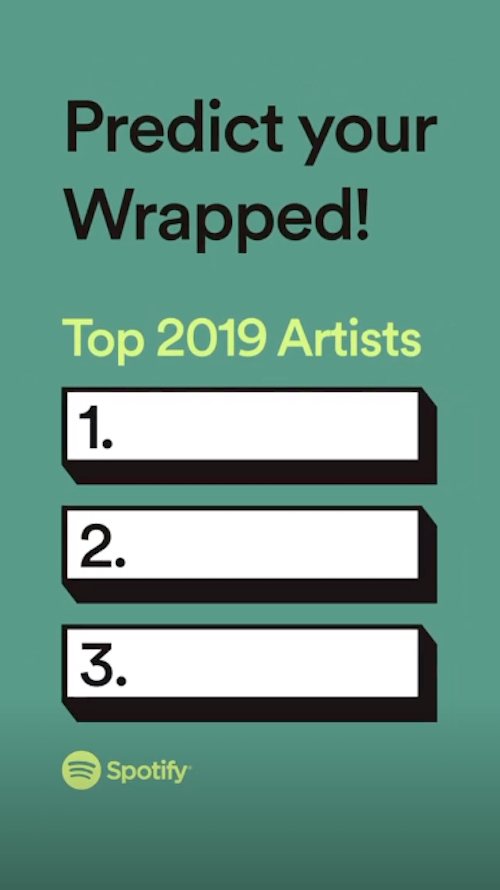 Who do you think will be on your Spotify Wrapped 2019? Let us know in the comments below.

In October, Bring Me The Horizon launched a new line of merch that has a color scheme based on your Spotify listening habits. On the band’s new site amo in colour, you can log in to your Spotify and pick your favorite six songs from their most recent album amo.

The album has 13 tracks in general, so you have to narrow it down to only 6 picks. You can listen to amo below and figure out your favorite songs here.

Once you put in your selections, you receive an image of the Bring Me The Horizon hexagon symbol with a customized color palette based on the tracks. You can then buy the design on a t-shirt for $19. Your color scheme is on a spectrum from common to rare song picks based on the fandom. You can get your own t-shirt here.