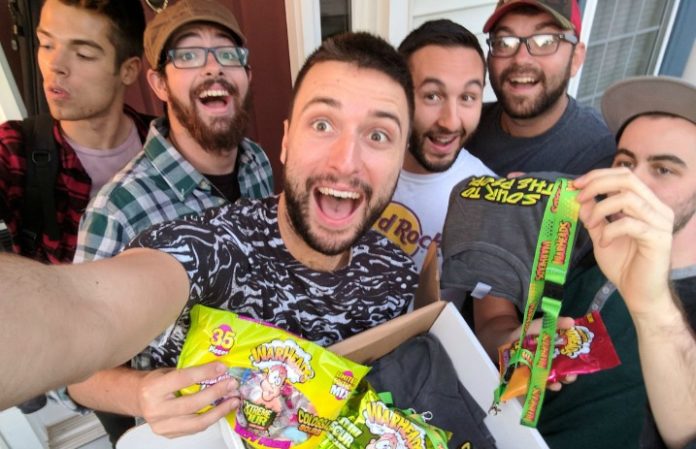 When we wrote our feature on 'Your favorite bands as Halloween candy' we had no idea the events we had set into motion. A simple comparison between a band and some candy created a friendship the internet simply wasn't ready for.

Our feature compared brass-rock phenomenon Stacked Like Pancakes to the fan-favorite Warheads candy.

The post prompted a retweet from the band that involved tagging the delicious sour candy.

Look at all of these incredible artists we're in a list with! about candy!

brb running to the store to get Warheads.@AltPress @WARHEADS https://t.co/IsYfJRTorB

Warheads responded by checking out their band-candy comparison.

brb going on Spotify to listen to Stacked Like Pancakes!

The conversation that followed was nothing short of entertaining, with Warheads being real slick in getting SLP to slide into their DMs.

little did you all know we’ve been working on a Warheads endorsement our entire careers https://t.co/vakiN4BGmY

Obviously! Send us a DM!

A friendship was quickly formed that proved to be the ultimate #FriendshipGoals.

@SLPancakes I know we just met, but today is #NationalPancakeDay and I feel like I should send you best wishes. ����

Okay yeah we were reaaaally excited to get our care package from our friends @WARHEADS. Thank you!

So what happens next? Do you send pancakes? How does this work?

Do you prefer plain or with fruit? https://t.co/Q3HLWaztZ2

sour pancakes?? (It's kind our thing)

Fans of both the band and the candy freaked over this new-found friendship.

And they say romance is dead.

What about if you put warheads in the pancakes?

I ship @SLPancakes and @WARHEADS

I dont know what warheads is doing but i like it

Thank you @AltPress for being the ultimate matchmaker ♥️����

You can catch Stacked Like Pancakes on tour this fall, where the first 30 tickets sold at every date will get you VIP (Very Important Pancake – obviously) and your very own delicious pancakes made by the band themselves. Head to stackedlikepancakes.com for the full list of dates!

In the meantime, be sure to check out SLP's recently released video and final installment from their sophomore album This Is Us. Watch the video for “Planetary” below!

What do you think of Stacked Like Pancakes and Warheads newly formed friendship? Let us know in the comments below.