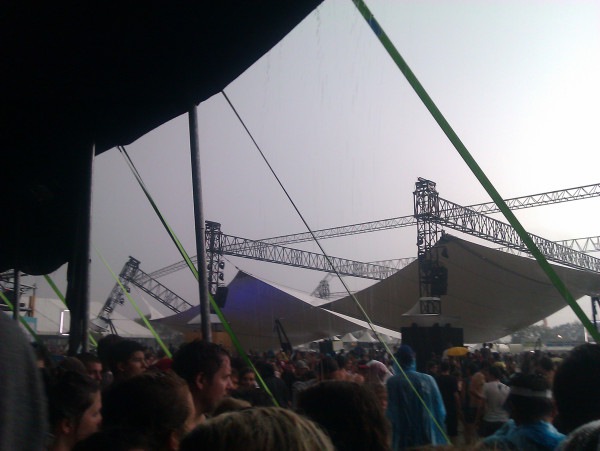 Belgian media outlet De Staandard is reporting that six people have died following a stage collapse during today's Pukkelpop festival. According to Pitchfork, the stage collapsed after a sudden storm swept through the festival grounds right as indie-rock act Smith Westerns were about to play; NME says the Shelter and Chateau stages were damaged, and the rest of the day's programming is expected to be called off. Numerous acts were scheduled to play today including Rise Against, Rival Schools, Skrillex, Good Charlotte, Bring Me The Horizon and more. We'll keep you posted on this story as it develops.

UPDATE: Video of the storm has surfaced; you can watch it below.

Update, 2:51 p.m.: Rise Against have just tweeted that the festival is canceled today.

To get a sense of what the scene was like, here's a brief news story on the collapse:

Update, 3:35 p.m.: Confusion continues to reign about the extent of the injuries that occurred at Pukkelpop; a Belgian television station is now reporting 3 people have died and 11 are “heavily injured.” However, an official number remains unconfirmed.

BBC's footage of the tragedy can be seen below:

Update, 4:53 p.m. The Associated Press and LA Times are now reporting 3 people have been confirmed dead. Musicians have also taken to Twitter to respond to the tragedy.