Avengers fans are going to be very hyped about a new Stan Lee action figure coming out soon.

The legendary comic book king’s cameo in the 2012 Avengers film is being turned into a sweet looking toy complete with a custom Captain America shield.

The new figure is listed at an affordable $24.99 but given how in-demand it will be it’s sure to hit off as a huge collectors item.

It sits at 6-inches tall and features high-quality design, detail, and articulation for the best possible displays. It’s based off Lee’s cameo where he appeared as a chess player in the film, and even comes with a chessboard accessory. It also comes with a Captain America shield brandished with Lee’s signature.

You can pre-order the new action figure here. 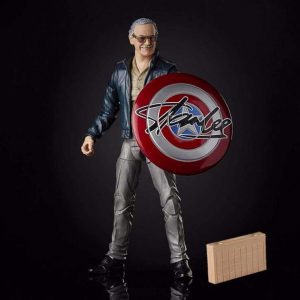 Best known as writer, editor and publisher of Marvel Comics, Lee passed away last November at the age of 95.

He was known to make cameos in the Marvel films with his final one coming in Avengers: Endgame.

It was previously reported there was a possibility for Lee’s cameos to continue past Endgame, at least into the forthcoming Spider-Man: Far From Home.

“We’ll see,” Marvel President Kevin Feige told ET Online. “We’re heading—We shot a couple of others, so we’re coming up on the last of them, yes.”

While it was neither confirmed nor denied that Lee would make show up in the film, director Joe Russo put an end to the plaguing question during a press day in Los Angeles.

When speaking of Lee’s cameo in Avengers: Endgame he tells Mashable, “It’s his last one committed to film.”

What do you think of the new Avengers Stan Lee action figure? Let us know in the comments below.