A possible title for ‘Star Wars: Episode IX’ was leaked

Finally, we get some possible insight to the film.

Little is known about what J.J. Abrams has planned for Star Wars: Episode IX. Well, at least until now.

One possible title has been floating around the internet. It stems from a Reddit user who apparently was able to get into the official Star Wars website.

The user was able to uncover a post that shows the future logo promoting the film which will be released Dec. 20. Oh and the title? Balance Of The Force.

Check out a screenshot from the Reddit thread below to see for yourself. 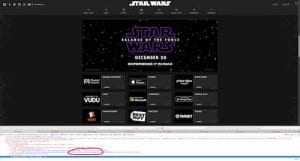 The next film will complete the Skywalker Saga forever and the trilogy Abrams began with A New Hope.

There’s huge pressure for the film as it will complete decades of filming and fans are eager to feel like they are receiving a satisfying conclusion.

This title is not confirmed, but it brings about an exciting concept that balance will be brought to the force with the final film.

See what fans had to say on Twitter about the possible title.

I like “Balance of the Force” if that is indeed the title of @StarWars Episode IX. #StarWars

Star Wars: Balance of the Force….I could live with that.

#StarWars I see a lot of “Balance Of The Force” on my TL. If this is indeed the title, i’m not crazy about it, but it could be worse…..

Who knows if this is true, but all we are sure of is that we can’t wait to see it.

What do you think of the possible title? Sound off in the comments!