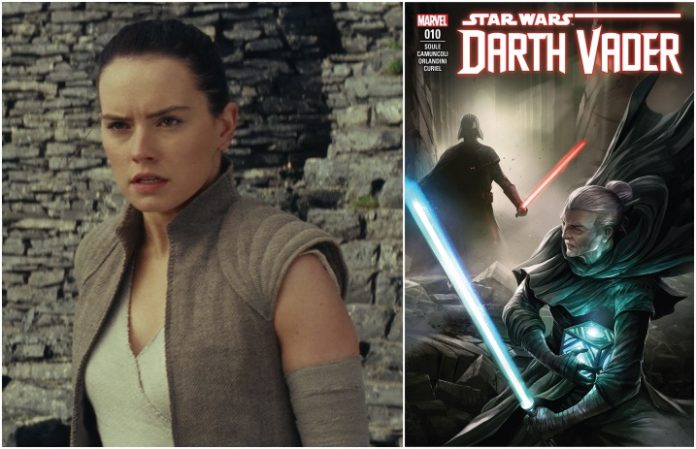 How did Rey get the Force in Star Wars?

After the character, portrayed by Daisy Ridley, discovered she's a Force-user in 2015's The Force Awakens and sharpened her power in the recent The Last Jedi, fans want to know: What exactly caused Rey to be Force-sensitive? Thankfully, a new comic book explains—check it out.

Read more: 'Solo' movie will show a new side of 'Star Wars'

Spoilers ahead for Last Jedi holdouts: After much speculation, it was revealed in December's Episode VIII that Rey is neither a Skywalker descendent nor sprung from a Jedi bloodline, meaning her capacity isn't hereditary but perhaps a manifestation of some deep-down spark. Still, as noted by ComicBook.com, it doesn't look like just anyone can up and activate the Force, as evidenced by Chirrut's endeavors in Rogue One. So how did Rey get the Force?

In the new, tenth issue of the Darth Vader comic series, out today via Marvel, writer Charles Soule and illustrator Giuseppe Camuncoli elucidate some uncertain aspects of the Force. But before we get into that, another spoiler warning: If you'd like to read the comic without any foreknowledge, go ahead and stop right here and get yourself a copy of Darth Vader #10. Otherwise, read on to see how Rey has the Force despite a seeming lack of congenital links.

At the start of Darth Vader #10, an Jedi named Jocasta Nu reveals that the Force continues as long as there is life in the galaxy. Disclosed during a fight with Vader (once Nu realizes the Sith Lord is actually Anakin Skywalker), she drops some Force wisdom on him. “The Force is eternal,” Nu says. “It cannot be ended, it cannot be stopped, not so long as life exists. It will find its vessels. It always has—you know this. There are others, waiting out in the galaxy.”

According to the comic, it looks like the Force simply continues its galactic quest for willing recipients, even if there are no Jedis left to take up the cause. Vader knows this to be true—after all, he was supposedly just a regular boy from Tatooine before he realized his full-on Force potential. Seems like Rey is the same way… Just like Vader, she came from a humble background only to discern her true scope in the Force later on. What do you think about that?

Search your feelings; do you agree with this comic book's take on the Force? Were you disappointed to learn who Rey's parents really were in The Last Jedi? Sound off in the comments and let us know if you're Force-sensitive.