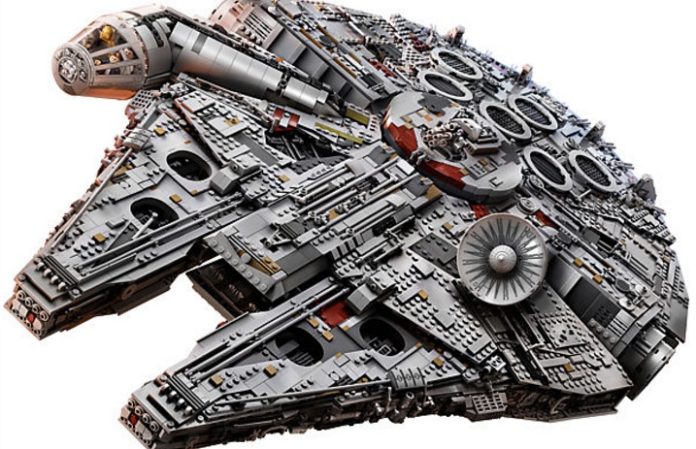 Calling all hardcore Star Wars fans—aka fans that would spend in the hundreds for their favorite series.

LEGO just announced the “Ultimate Collector Series Millennium Falcon,” which just so happens to be the most expensive set they’ve ever sold.

Read more: These ‘Star Wars’ shoes are perfect for bullseyeing womp rats in your T-16 back home

The price tag? A whopping $799.99 for the 7,541 piece set.  Of course, according to LEGO, the set includes 4 classic crew minifigures: Han Solo, Chewbacca, Princess Leia and C-3PO. Not to mention the 3 Episode VII/VIII crew minifigures: Older Han Solo, Rey and Finn.

And it happens to be the most detailed Millennium Falcon model they’ve ever created, with LEGO boasting that it has all the details anyone would hope to see, including “intricate exterior detailing, upper and lower quad laser cannons, landing legs, lowering boarding ramp and a 4-minifigure cockpit with detachable canopy.”

Plus, you can change out the features and crew characters to switch between classic and Episode VII/VIII versions of the Millennium Falcon. Once again, a true Star Wars fan might think this is a worthy investment.

If you’re interested in picking up the “perfect intergalactic toy or flagship display model,” you can do that here.

What are your thoughts on LEGO’s intense Millennium Falcon set? Let us know in the comments below!