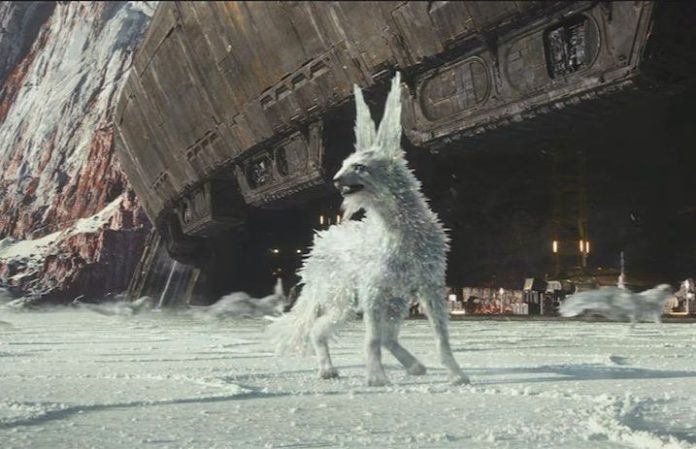 You're likely as excited as we are for Star Wars: The Last Jedi. With a new film comes new characters, and one of the coolest? (Besides porgs, of course…) The crystal foxes.

As explained by Entertainment Weekly, we don't know too much about these characters—yet. However, they inhabit the “mineral-rich world of Crait” and burrow deep within the former hideout of the Rebel Alliance. They've supposedly existed for decades, “standing as proof that even the most inhospitable worlds cans harbor life.”

And while their character description is pretty vague, we do know that they're pretty dang adorable.

Wonder how they came to life? It's actually pretty interesting. Thank goodness for pups, as EW explains.

“We had a little dog come in and we built a little suit for it, and we covered that suit with clear drinking straws,” Neal Scanlan, head of the Star Wars creature shop, told EW. “It was amazing to see him run around. It could run and jump, and it had this wonderful sort of movement to it. It had a great sound to it, as well, because all the little straws moved and flexed with the animal.”

From there, the creature shop then used animatronics to bring these pups to life.

Now we'll just have to wait and see exactly what these characters will be up to in the movie.

Star Wars: The Last Jedi will be in theaters tomorrow, December 15, and to hold us over, we trawled the Unknown Regions in search of answers to some of our biggest questions about the year’s most anticipated film. Focusing our efforts on two of Episode 8’s key players–Rey and Supreme Leader Snoke–we’ve read up theories involving Mace Windu, giant glowing eggs and [gasp] Darth Jar Jar Binks. See those here!