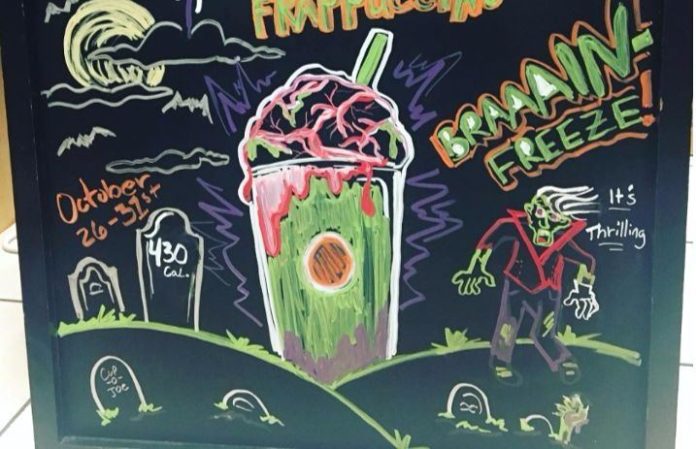 It looks like Starbucks is getting in the spooky spirit once again. They debuted a MCR-inspired frappuccino a few years back, and this year, they’re bringing the Halloween spirit to life in the spookiest way: With a Zombie Frappuccino, of course.

Read more: Starbucks’ new Halloween frappuccino will remind you of My Chemical Romance

The flavor was supposedly leaked by baristas, and it appears to feature purple, green and “gory” pink brains. (Because nothing screams zombie like “brains!”) According to Day Of The Human, it'll be a cream Frappuccino, blended with a “Green Caramel Apple Powder and Pink Powder” to give it a zombie-like feel. Not to mention the pink “brains” whipped cream and pink mocha drizzle on top.

My first #baristalife post, I finally got to use some of my skills for our store�� can't wait to try this new drink we will offer in late October! #starbucks #zombiefrappuccino #ilovemyjob

While we’re not sure how we feel about an uber-sugary green caramel apple flavor, we already know we’ll be camped out at some point in the Oct. 26-31 time frame to give the newest Starbucks flavor a try.

Well, the technically unconfirmed Starbucks flavor a try. Although a rep from the coffee brand told Cosmopolitan: “Our Halloween plans are still under [mummy] wraps, but we look forward to sharing more details with the living soon.”

Would you dare try a zombie-themed frappuccino? Let us know in the comments below!