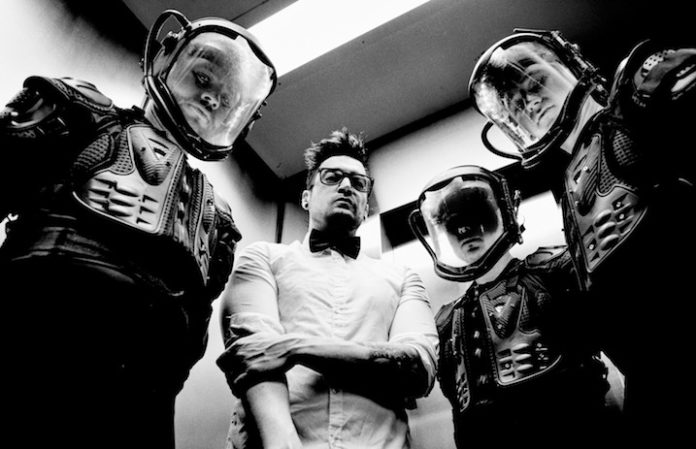 Starset are currently on tour and can be seen at all the major rock festivals, along with dates supporting I Prevail and more.

Known for their unique demonstrations—aka concerts—the group have announced two amazing performances at the Fiske Planetarium in Boulder, Colorado.

Want to attend for free? You're in luck. Alternative Press is teaming up with Starset for a special contest: the Starset Planetarium Demonstration Flyaway Sweepstakes. One winner will be randomly drawn to receive an awesome trip for two to one of those planetarium shows. Round-trip travel, room, tickets and meet-and-greet for the winner and his/her guest are all included!

“Our goal in every show is to create the most immersive experience possible—transporting the crowd from reality and into the Starset world for the duration of the performance,” frontman Dustin Bates tells AP. “In fact, this is one of the reasons we call our performances 'demonstrations' rather than 'shows.' Planetarium demonstrations are special because they allow us to take this concept to its fullest extent—literally immersing the audience under 360 degrees of content. As far as the performance itself, we tend to take a step back and put ourselves further into that world rather than being in-your-face rocking.”

The Starset Demonstrations will take place Thursday, June 29 at 10 p.m. and Friday, June 30 at 9 p.m. And Starset couldn't be more stoked.

“The fan experience is the primary reward,” Bates says. “People really seem to enjoy the ride. Beyond that, the feeling of reaching a new level in the development of our live presentation is always satisfying, as this is something we never stop striving for.”

And for those of you wondering: Yes, Starset's planetarium shows will includes songs from Vessels and Transmissions. “Absolutely,” the band said. “We want to give fans a taste of both records while focusing on the songs we believe work best in the planetarium environment.”

Tickets to Starset's planetarium demonstrations are available now, and you can purchase yours here.

Signed to Razor & Tie, Starset hail from Columbus, Ohio, and began in 2013. See all their forthcoming demonstrations here.

What do you want to see at a planetarium show? Tell us in the comments.