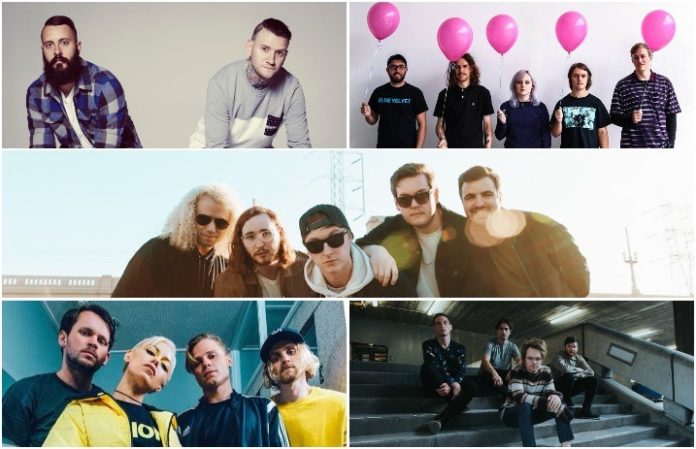 Watch new music videos from State Champs, Eat Your Heart Out and more—plus, don’t miss shows with Enter Shikari and Tonight Alive. Check out the news you might have missed today below!

1. State Champs shared a music video for “Dead And Gone”

State Champs are back with a chase-filled music video for “Dead And Gone.” The track is taken from the band’s upcoming album Living Proof, out June 15. You can purchase the album here. The band will also be hitting the road on Warped Tour all summer. You can get tickets and see a list of dates here.

TWO special intimate UK shows for Summer 2018.
one at Hatfield Forum. one somewhere else.
all will be revealed (and tickets will go on sale for both)
10AM THIS FRIDAY.
consider yourself teased.
greetings from Fukuoka, Japan.
x pic.twitter.com/tHElXYgulk

3. This Wild Life shared a tutorial for “Hold You Here”

This Wild Life walked through how to play their song “Hold You Here.” You can purchase the single here.

Thrilled to announce @BYAMAUS and @thisisaviva will be joining us for the Underworld Tour! Final tickets on sale now: https://t.co/Su7x9jRRU3 pic.twitter.com/7m9Ssbjuwc

Tonight Alive announced Between You & Me and Aviva as their tour support for their Australian tour. For a full list of dates and to purchase tickets, you can go here.

5. Eat Your Heart Out premiered a music video for “Rust”

Eat Your Heart Out shared a music video for their song “Rust.” The track is taken from the band’s EP Mind Games, out now. You can pick up your copy of it here. The band will also be embarking on an Australian tour later this year.  For dates and to purchase tickets, you can go here.

’68 and Comrades are putting on a small summer tour through Texas. Check out the dates below.

Brooklyn, New York’s Stringer signed to Wiretap Records. Following the news of the signing, the band also dropped their first single, “Ghosts.” The song is taken from the band’s forthcoming album My Bad, out June 29. You can preorder your copy of it here.

8. At The Drive In announced South American tour

At The Drive In announced dates for their 2018 South American tour. For tickets, you can go here.

9. All Get Out shared a new single

All Get Out shared their new single, “However Long.” The band will also be hitting the road with the Dangerous Summer, and you can see a full list of dates and purchase tickets here.

Canadian punks Dubé shared a music video for their song “Stoned Love.” The band will be kicking off a tour with Counterfeit later this month. For a full list of dates and to purchase tickets, you can go here.

.@CPFNYC’s 2018 season of #SummerStage is HERE! Join us for more than 100 shows in 18 neighborhood NYC parks this summer. https://t.co/CFgHuhkEj1 pic.twitter.com/VQf3JflIF7

The lineup for SummerStage has been announced for its 2018 season. The best part of the events? They’re free. For more information of NYC’s largest free outdoor fest, you can go here.

Melbourne metal band Annihilist signed with Truth Inc. Records. The band will be hitting the road next month. For dates and tickets, you can go here.

13. Back To The Beach announced performance times

Because we really REALLY like you…HERE ARE SET TIMES FOR #BACKTOTHEBEACHFEST!!! Plan accordingly! Tix available at the link in the bio!!

Back To The Beach announced band performance times. The two-day festival will be April 28 and 29 at Huntington State Beach. For more information on the event and to purchase tickets, you can go here.