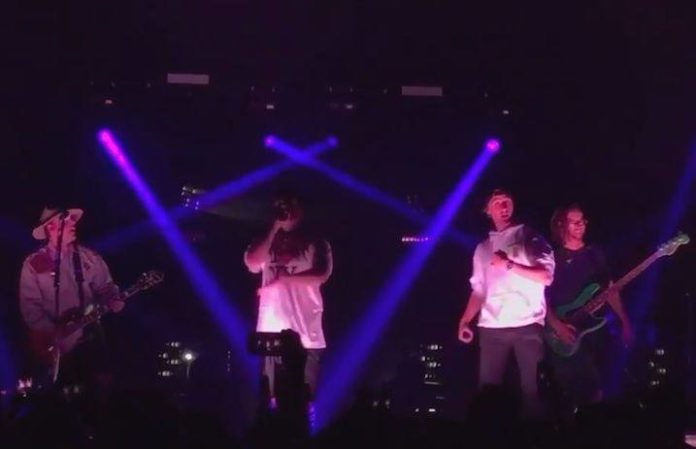 Pop punk favorites State Champs teamed up with rapper Hoodie Allen for Allen’s track, “All My Friends,” and Derek DiScanio just performed the track with Hoodie live. It’s incredible, as if we'd expect anything less.

Read more: 10 State Champs choruses you can’t get out of your head

The epic crossover was caught with fan shot footage, as well as footage from State Champs’ guitarist Tyler Szalkowski.

Their cross-genre friendship is what we live for—watch the epic pop-punk/rap crossover live below!

“I met the guys at Reading and Leeds last summer, which turned into a crazy two nights of partying and immediate friendship,” Hoodie Allen told AP about their epic track.

”I knew I wanted to work with Champs and make it a true collaboration between what I do and what they do,” Hoodie Allen says. “I knew Derek could kill it vocally, but it also needed to feel like a melding of two worlds, so we took the demo and spent two days together in NYC making it feel right. I'm so happy with how it came out, and my favorite part is the pop punk breakdown.”

Not to mention, the Champs guys had a great time working with Hoodie, too.

“Working with Hoodie was really cool for us,” State Champs' Tyler Szalkowski told us. “We've never done a collab with a rapper, so we didn't really know what to expect. It was fun to watch how he works and learn a different approach to songwriting. He made the whole thing easy and let us do our thing on it. The result is pop-punk rap powerhouse of a track. No other way to describe it!”

And we couldn't agree more.

What are your thoughts on their live performance? Let us know in the comments below!