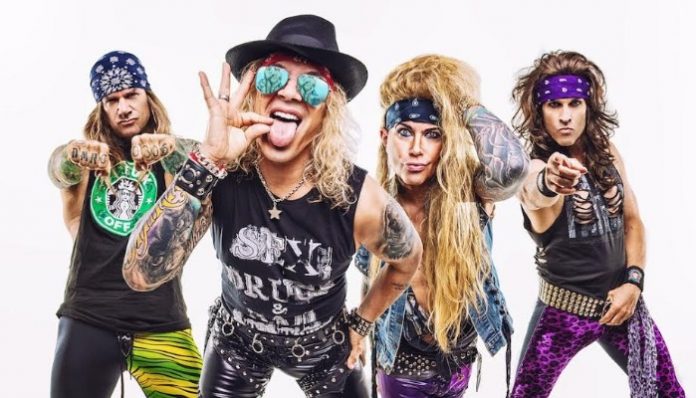 Steel Panther have announced their new album Heavy Metal Rules with a new song and video.

The band made the major announcement on social media that the album was dropping Sept. 27 and shared the new video inspired by The Hangover.

The new song is called “All I Wanna Do Is F**k (Myself Tonight).” In the video,  Carrot Top, Five Finger Death Punch bassist Chris Kael and a few more familiar faces make some sneaky cameos.You can see the full video for it below.

“Heavy Metal Rules is the ultimate party album,” the band said in a press release. “Anthem after anthem and hook after hook, the songs will provide the soundtrack to your new bitchin’ heavy metal life. The first single, ‘All I Wanna Do Is F**k (Myself Tonight)’, is the ultimate song about self-love and having a positive personal self-image. It is the kind of song you put on to get yourself in the mood whether you’re getting ready to have sex with yourself or 17 girls in a row.”

The full 10-track album is available for preorder here.

Back in March, the band unveiled their second guitar pedal, the “Poontang Boomerang” following the ban of their original pedal, the “Pussy Melter” on Reverb.

“We understand what this pedal does. In this case, the imagery and the pedal itself is what we do not allow on our site.”

It seems that anyone attempting to sell said pedal had their item “Suspended” citing it as “explicit/offensive imagery”.

Find out more about the removal of the pedal by watching the video below:

Upon hearing about the ban, Steel Panther provided the following statement:

As for Reverb.com, we think its ridiculous that they are biased towards the mighty Pussy Melter. We have seen so many comparably named items on their website for sale, yet they have decided to just ban our pedal from being sold there? If we’ve learned anything from this whole situation, selling your shit at garage sales is way cooler!”

Steel Panther seem to be fighting back with the unveiling of their second pedal titled the “Poontang Boomerang”.

The digital delay pedal has four tone settings titled “Distance”, “Feedback”, “Dry”, and “Wet”. It also has a toggle switch so guitarists can switch between “G Day” or “Crikey”.

The pedal is available for pre-order, here.

How excited are you for the new Steel Panther album? What do you think of the new song? Sound off in the comments down below!