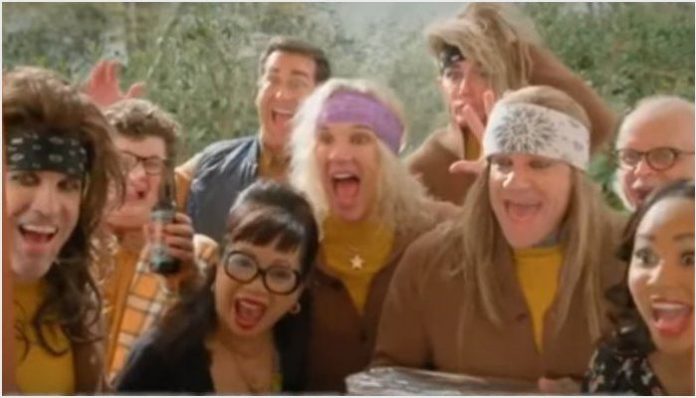 Steel Panther teamed up with actor/comedian Rob Riggle and the NFL to create “Thanks Again. It’s the “Thanksgiving song you never knew you needed.”

This isn’t the first time the glam metal band has been associated themselves with the NFL. Last November, they made a surprise appearance during FOX’s Thursday Night Football broadcast of the Steelers vs. Panthers game.

For a bit of taped fun during the broadcast, the band “mistakenly” turn up to FOX studios, revealing they were they were told they were headlining Thursday Night Football.

Michael Strahan has to correct them, telling them the game is “Steelers-Panthers,” and that they wouldn’t be getting a headlining set.

Though they didn’t perform a full set, the station was treated to a bit of the FOX football theme music from guitarist Satchel and glam metal dress up from FOX analyst Terry Bradshaw!

This year, Steel Panther debuted a new holiday track, “Thanks Again,” on NFL on FOX before the Thanksgiving Day football festivities began with the first game featuring the Detroit Lions and Chicago Bears.

It may be Black Friday, but that doesn’t mean you can’t jam to some Thanksgiving tunes, or rather one as the band took to Twitter to announce their appearance.

“If you happen to be watching @NFLonFOX today, you may see a familiar face… or four,” they posted. Take a look at a couple of photos of the band on set below.

TUNE IN ALERT!! If you happen to be watching @NFLonFOX today, you may see a familiar face…or four! Keep your eyes out between 12:00PM – 12:30PM EST!! #HeavyMetalRules pic.twitter.com/aFB8PZITEP

With lyrics written by Riggle, the track is all about giving thanks for the little things. From football and family, to good food and bad beer, the words perfectly describe a typical Thanksgiving celebration.

ICYMI, we collaborated with @RobRiggle to bring you the #Thanksgiving song you never knew you needed!! Shout out to Rob and @NFLonFOX for having us!!#ThanksAgain pic.twitter.com/HR94e0etyd

Check out the Steel Panther’s performance of “Thanks Again” below.

Steel Panther are currently on a headlining tour with support from Stitched Up Hearts, in honor of their newest LP Heavy Metal Rules. A full list of remaining dates are below, and tickets are available here.