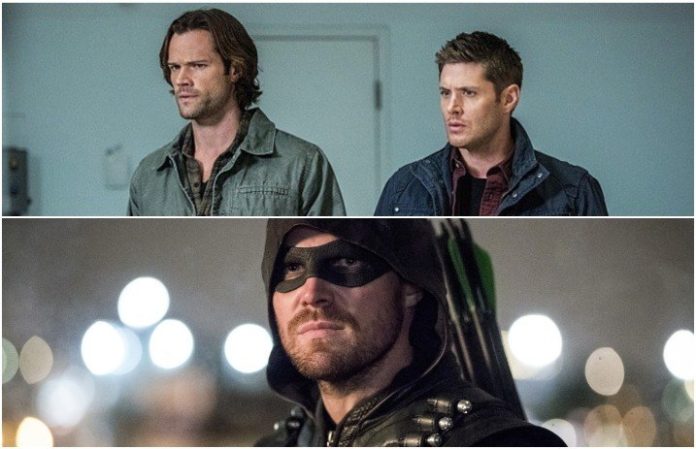 We've seen the Winchester brothers deal with some pretty interesting characters in their 13, almost 14 (!!), seasons, but one character we haven't seen the brothers face: a superhero.

Coming off a recent crossover with Scooby-Doo, fans of Supernatural have come to the realization that getting a crossover between the brothers and other television characters isn't something that's so far-fetched, a realization that hasn't been lost for their network counterpart, Arrow star, Stephen Amell.

Amell recently shared a photo of himself with Supernatural star Jensen Ackles (Dean Winchester) to his Twitter with the caption “It's the crossover we deserve.”

It’s the crossover we deserve. pic.twitter.com/idltMQa4bO

“Without breaking the fourth wall with too much gusto, if I could show up on Supernatural as, like, someone pumping gas in their car or something like that, or just someone that they murder, that would be tremendous,” Amell said. “And maybe it's one of those things where, I know that it doesn’t make sense and I know that its one of those things where it's not the same universe, but at the same time its TV and its supposed to be fun so maybe, you know, one of these days [Arrow executive producer] Greg Berlanti will be sitting in a room with the head honcho of Supernatural and they’ll just go, ‘Eh, why not?’”

We can only hope the creators of the two shows will consider the show, especially coming after the massive success of Supernatural's previous crossover with Scooby-Doo. The show, coined “Scoobynatural,” was a mix of both live-action and animation, meaning that fans of each series got the best of both worlds. The show featured the Winchester brothers getting transported into the spooky world of Scooby-Doo.

It was such a popular crossover, that Hot Topic even dropped a clothing line in support of the show, so with the success of “Scoobynatural,” we can only hope that we'll get to see “Arrownatural” next.

Would you want to see a Supernatural and Arrow crossover? Let us know in the comments below!