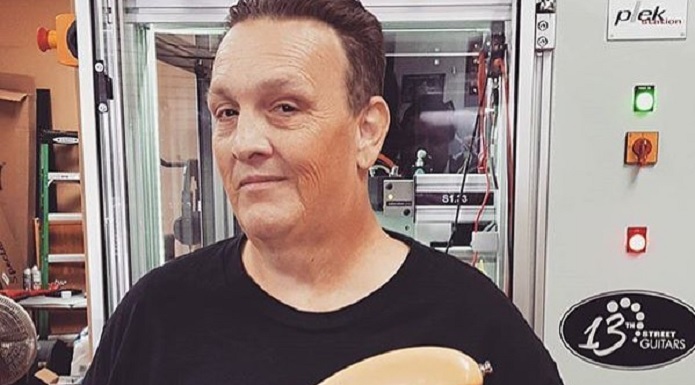 Steve Soto, The Adolescents’ bassist and Agent Orange co-founder, has died at 54.

The Adolescents’ shared the news on Twitter, writing, “With heavy heart I share the passing of Steve Soto, my friend and bandmate since 1979.”

with heavy heart i share the passing of steve soto, my friend and bandmate since 1979. i dont know what to do. or to say.

Soto was The Adolescents’ bassist and only constant member since the band’s inception in 1980. He also co-founded and played in Agent Orange.

The cause of death is still unknown, however, guitarist Dan Root shared that Soto passed away in his sleep.

“He will be missed,” Root wrote. “We will be posting details on a memorial as soon as plans are finalized.”

Musicians and music industry professionals reacted to the news to Soto’s death:

I have to share the story with this post. Last night around midnight I was fuming over the current political/social climate that’s reeking havoc in America. I wanted to lash out. I wanted to punch something. I wanted to scream fuck you into the ether.. alas I decided to make a playlist instead. punk rock bands that reflect my despair. Something fast loud catchy. I like drugs! I want to give you the creeps! Teenage rebel!! GIMMIE GIMMIE GIMMIE! Code blue!! I couldn’t decide which adolescents song to put on.. hmm.. Rip it up? Creatures? Kids of the black hole? The whole album is so great. Finally decided on Amoeba remembering seeing them in Sacramento in a Park in the 80s.. such a great show. Such a great song. This playlist hit the right spot for me when I needed it the most. Twisted, fucked up, brilliant. Music is a powerful tool in times of anger and sadness. Anyway an hour later I looked at Instagram and saw people eulogizing Steve Soto died. Life isn’t fair. Sometimes it just sucks.. But music can help you feel like you’re not alone. Amoeba did that for me last night. RIP Steve Soto

We are devastated by the news of Steve Soto’s passing. He played in so many great bands, was a great bass player, guitar player, & singer, but mostly he was just an honest & sweet guy. He was our hero in the Adolescents and an inspiration to us as musicians. #heartbroken

Steve Soto – you will always be an angel. The kindest and most generous punk rocker that ever lived. RIP #stevesoto #adolescents

We are truly at a loss for words to hear about the passing of our great friend Steve Soto. The nicest guy in punk rock. Our condolences go out to his family and friends.
RIP #SteveSoto ❤ pic.twitter.com/4Cs1cCyBqD

Not a whole lot of people I’ve met in my life that I could call up anytime, anywhere, any condition and they would help. My brother Steve Soto was one of the few. I owe most of what I’ve done post Ramones to Steve. He put the band together to record all 3 of my releases and toured with me for 5 years. He called in favors from some big SOCAL players to help me out when I was just coming back into music. He organized the record deal we got with Fat records, and always took time to talk with me when things were tough. I could relax on stage with Steve behind me, his playing was as solid as it gets, and his voice boomed over mine when I was burnt and had no voice left. I did my best to repay him in anyway I could and I hope he knew how much I appreciated, loved, and respected him. I’m going to miss him. Rock on my brother. See you on the other side.

I just found out Steve Soto passed away. He fought through so many health issues & they finally caught up. He was one of the most positive people I ever knew. Did the whole @VansWarpedTour with the Adolescents in a van last summer.
RIP my friend.

Saddened to hear about the passing of Steve Soto. I only knew Steve in passing, our bands played a handful of shows together over the years. Was always a welcoming and friendly face to run into. I’m appreciative of those memories and having had the chance to share the stage.

When you talk about California punk Rock and Punk Rock in general, Steve Soto will forever be on top of the list of people who put it on the map. He 100% helped pave the way for all of us who decided to pick up an instrument and play our version of Punk. You will be missed. RIP pic.twitter.com/usYcaYLPxC

Oh no. So sorry brother. This is truly a great loss for our community, scene, and beyond.

So much love and positivity to The Adolescents and their crew, past and present.

RIP Steve Soto, fellow traveler, founding member of @TheAdolescents and Agent Orange. Our hearts go out to family, friends, & the fans. You died too young but your music will live forever. pic.twitter.com/knhUB4n87x

Heartbreaking news that Steve Soto has passed. Such a kind & humble guy, in addition to being an original California punk legend & innovator. I was fortunate enough to have casually known him since the 90s & he was always such a good dude. ?@TheAdolescents #RIPSteveSoto pic.twitter.com/KSbMumabzl

RIP Steve Soto, our condolences to you & yours. ❤ https://t.co/N1kuRnHnI8

Ryan Seaman (I Don’t Know Hot But They Found Me)