Everyone knows Eleven loves her Eggos, and who can blame her? While Season 1 of Stranger Things had her stealing them from a grocery store to get her waffle fix, Season 2 took it to the next level.

If you were in the midst of your Season 2 binge and couldn’t get over how amazing Hopper’s triple-decker Eggo extravaganza was, then you’re in luck.

Read more: Watch Chance The Rapper and Steve from ‘Stranger Things’ in ‘Slice’

Halloween Horror Nights at Universal Studios will feature a Stranger Things maze this year. As if that’s not cool enough, the attraction will also be dishing out some foods inspired by the show including Hopper’s masterpiece.


The waffle is dripping with Reese’s Pieces, jelly beans and chocolate chips as well as topped with whipped cream—exactly as it was on the show.

If you like a little less ego with your desert, the park is also offering donuts topped with waffle pieces. 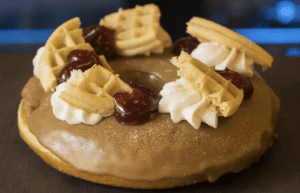 The park will also serve an Upside Down Burger, which is covered in spicy queso and Flamin’ Hot Cheetos. Demogorgon Totchos, which basically a mix of tater tots and nachos also covered in Flamin Hot Cheetos.

Universal revealed photos from the Stranger Things attraction earlier this month along with a trailer, which can be seen below.

This week, they dropped more information about the maze including that it’s set during Season 1 where it follows Will’s journey from Hawkins to the Upside Down. The set builders used thousands of reference images, which allowed them to get the details down to the wallpaper in the Byers’ living room and the floating dust in the Upside Down.

Halloween Horror Nights will also feature attractions based upon Halloween 4: The Return Of Michael Myers, Poltergeist, Trick ‘r Treat and Blumhouse’s The First Purge and Happy Death Day and many more. The event kicks off this Friday, Sept. 14 through Nov. 3, and more information including locations is available here.