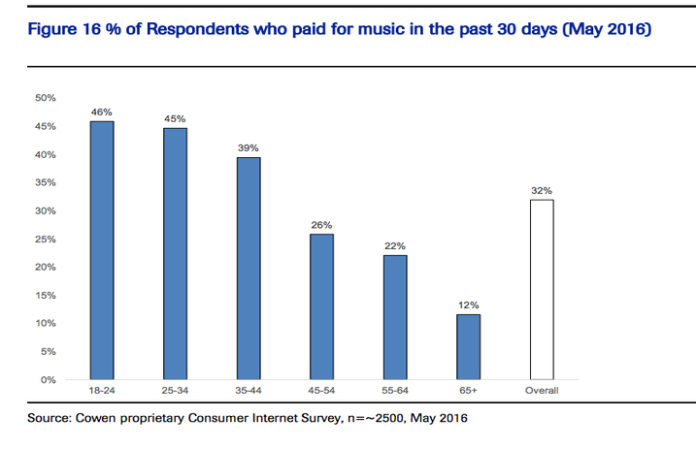 It's common for people to think that young people don't pay for their music.

But Business Insider reported a study that found the exact opposite. Actually, as Americans get older, they pay for music less often.

The study, conducted by Cowen's John Blackledge and Time Arcuri, shows that 46 percent of U.S. respondents ages 18-24 had paid for music in the past month, which is significantly higher than ages 45-54 (26 percent) and 65+ (12 percent).

This does make intuitive sense, factoring in older generations' nostalgic affinity for music from their youth, which makes them less likely to purchase new music. However, as Business Insider notes, it is a positive result for the future of music.

More young people are subscribing to services like Spotify and Apple Music that are based on paying for music access rather than individual digital downloads. Consequently, the numbers from a study like this could change over time as these young people carry their music streaming accounts with them throughout their lifetime.

Basically, it doesn't look like those 18-24 year olds are going to cancel their Spotify accounts anytime soon, and, when they push 65, they could in effect be paying for music way more than older generations do now.