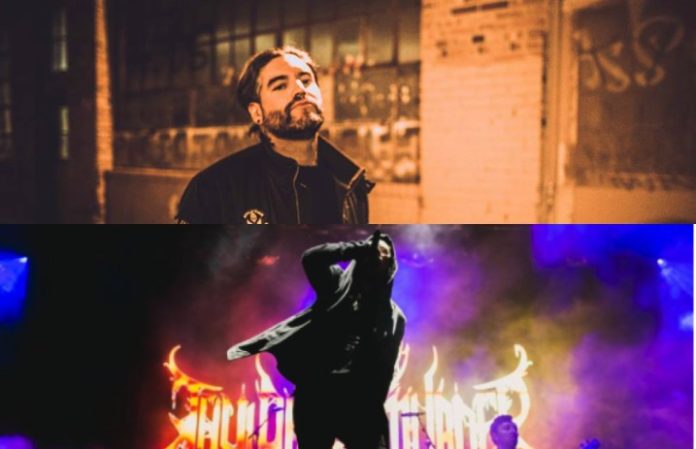 Squaring off in round three, in one corner we have Suicide Silence's Eddie Hermida, and in the other, Thy Art Is Murder's C.J. McMahon. And no, they don't like each other.

In the recent months since McMahon returned to his band and Suicide Silence released their new record with Hermida, the two have clashed over the present and future state of deathcore.

It all started when Hermida name dropped Thy Art Is Murder in interviews with Metal Wani and Clrvynt, saying that deathcore is doomed if bands like them keep writing the same song over and over.

Thy Art Is Murder not so subtly responded with this merch drop, referencing the “Let’s make deathcore great again” quote from Hermida's exchange with Metal Wani.

We don't need any more shade, we made our own. Link in our bio.

Now, in a brand new interview with live-metal.net, Hermida has addressed his gripe with Thy Art Is Murder extensively. You can read his entire opinion below, graciously transcribed by ThePrp. He even addresses the hat.

In his rant, Hermida says Thy Art Is Murder are “looking for attention” and that vocalist C.J. McMahon is a “sellout” for putting money before music, claiming he would “say that straight to his face.” Needless to say, he gets a little riled up.

On the topic of if he would be more careful when calling out other bands, Hermida had this response:

“Am I being more careful now? No, fuck no. Thy Art Is Murder absolutely saw an opportunity and ran with it, and honestly, they did the silliest thing you could ever do in mimicking somebody like Trump and say that they are not selling out. They are literally going, “Hey, we’re not sell-outs, but please buy this hat. You need to buy this hat.” It’s completely backwards thinking.

I know from experience. I know from being in a band that was desperate to serve the fans, creating music that served us and the fans at the same time. All Shall Perish was a band that did that 100 percent. Especially with members leaving and all that, we always worried about what other bands were doing and how to be better than that. In that process, you forget who you are.

It’s really funny that it’s become such a thing, but the reality is that I didn’t say anything that was that hurtful towards that band. They saw an opportunity, and they ran with it. If anything, they’re hurting themselves by continuing that mentality and continuing that really tongue-in-cheek way of doing things.

[Referring to Thy Art Is Murder vocalist C.J. McMahon] ‘You, know, nothing else is selling, so I quit the band to begin with. There’s no money in it, so let me write this long-ass fuckin’ expose about how band members don’t make any money, then later come right back and basically say I’m not a sellout.’

And at the end of the day, that is a sellout. A person who is looking for money and a person who talks about money and focuses on money when they’re making music is a complete sellout. I would say that straight to his face, and I would say that to any band member in this genre that isn’t challenging anybody.

Read More: Thy Art Is Murder guitarist on if band will experiment with clean vocals: “Never”

Anybody that’s going out there for the sake of making money and for the sake of being in a huge band for selling albums are out of their minds. They’re completely backwards.
When we started making music as 15- and 16-year-old kids, you don’t have dreams and aspirations of being a money-making person. When Mitch [Lucker] created his band, all he wanted was to be is the best band in the world.

He didn’t give a fuck about Lamborghinis or houses or anything. When the band started making money, it was because he realized in order to make money in this world, you have to work your ass off. You have to break yourself emotionally and physically in order to get paid the little amount that we do get paid.

That’s all any musician who is a musician wants. They want comfort, and they just want to live. I don’t think that is selling out at all, I think that’s being a musician. It’s having some sort of value for your art and giving it for the value that it is. Everything else is literally just a copy of that, and if you want to run with it, you can. But personally, I didn’t write this record to sell a bunch of records. If it does, sweet. If it doesn’t, sweet, I still got to do what I wanted to do.

If people want to turn something into an opportunity because I mentioned their band’s name, so be it. That’s not why I mentioned it. I mentioned it to show people why we’re doing what we’re doing. We didn’t want to create the same record that Suicide Silencewould have written if we had written a record to make money.

If we would’ve written that record, we wouldn’t even be talked about. I could have mentioned fucking Pantera, and it would have fallen on deaf ears. That fact is we did something huge, and now I can say something like ‘Thy Art Is Murder‘ and it gets talked about a month later. When you make waves, people want to try to surf.”

You can listen to the interview in its entirety here. Suicide Silence have currently been undergoing a backlash in response to their new album, which has seen sales drop off more than half of what they were for their previous release. Hermida and the group remain unphased however, standing by the notion that they made the record the way they wanted to.

We'll have to wait and see if there is any response from Thy Art Is Murder, as they have been quiet on his remarks thus far.