Sum 41 have canceled the second night of their Paris stop for the No Personal Space tour after an explosive device was detonated outside of the venue’s door. After playing Zénith Paris Friday, the band were set to play a sold out show at the Les Étoiles Saturday. No injuries have been reported.

The band shared a statement on social media, explaining that while no one has been injured, they’re “unable to guarantee the safety of the fans in attendance” and plan to reschedule.

“During load in for tonight’s performance in Paris, an explosive device was detonated just outside of the venue door,” the band shared on Instagram. “Band, crew, the fans in line are all safe, and there were no injuries. Due to the intimate nature of our ‘Personal Space’ performances, we are unable to guarantee the safety of the fans in attendance. We are deeply saddened to announce that tonight’s show has been canceled. More information to follow.

“For refunds, please contact your local Live Nation ticket outlet. We are currently discussing our options to schedule a make up show as soon as possible. Please stay tuned for updates in the coming weeks.”

Guitarist Dave Brownsound and drummer Frank Zummo both took to socials to share they were OK.

“@sum41 #nopersonalspace #sum41 please inform anyone you know that is planning to attend the show,” Brownsound says.

“We’re all safe and okay!” Zummo echoed. “Please everyone stay away from the venue tonight! We love you and are so sorry to cancel! ❤️”

Read more: Sum 41 ditched the DIY rulebook on the road to ‘Does This Look Infected’

Live Nation France also shared news of the cancelation, writing, “URGENT / The Sum 41 concert planned for the stars this evening is canceled, seats are refundable at your point of purchase. More details to come.”

The people of France have been protesting French President Emmanuel Macron’s plans to overhaul the pension system for more than 40 days. While it hasn’t been confirmed this is the cause of the explosive device, many fans in attendance have pointed to this as a potential explanation as the protest occurred in nearby streets.

Due to aggressive protests happening nearby the venue, the show tonight at Les Étoiles has been cancelled. Tickets will be refunded at point of purchase. The band is working on to re-schedule the show. Stay tuned for updates!

So if this explosif device was from the protestation of yellow jackets that means that after disturbing us in Paris for 1 and a half year, they've Just decided to fuck with my personal life by canceling the show of tonight 😭😭😭

Maybe it's one device of the protest march in Paris. The march was not so far from the venue.

One fan says the band brought those in line inside for safety while they evaluated the next plan of action.

Second night unfortunately canceled because of black block asshole … But super professional and friendly team! They brought us in for safety! Even if the guys were just passing by to go crack up with the cops in the Place de la République. After an hour of waiting in the room, the group and the team made the decision to cancel the concert. The small room of the stars having only one entrance, they did not want to take risks for our safety and theirs!

To apologize for the cancellation, they offered us a t-shirt, yesterday’s set list and picks.
Then give an after-show pass to keep preciously until the postponement date. We will be able (the 15 people present at the time) to meet the group during this next concert.

Then waiting for it to calm down outside, they showed us all of the group’s guitars and basses, one by one! We will never thank the whole team for this super crazy weekend! Love you guys! See you soon

While also not confirmed, it’s being reported by fans in attendance that the explosive device was a firecracker.

“Apparently there was a firecracker which exploded near the tail of the fans who were waiting for the intimate concert planned in a small hall of the stars of the Sum41 tonight,” twitter user Coclin11 writes, “No injuries but they decided to cancel the concert because no guaranteed fan safety.”

It was just a firecracker nothing else.

Sum 41 will continue their tour in London on Jan. 20. Remaining dates are available here.

Two hours after sharing their initial statement regarding an explosive device outside of the venue, Sum 41 deleted the post and shared a new one.

You can see the original statment, which was also shared by Zummo, and the new one below. 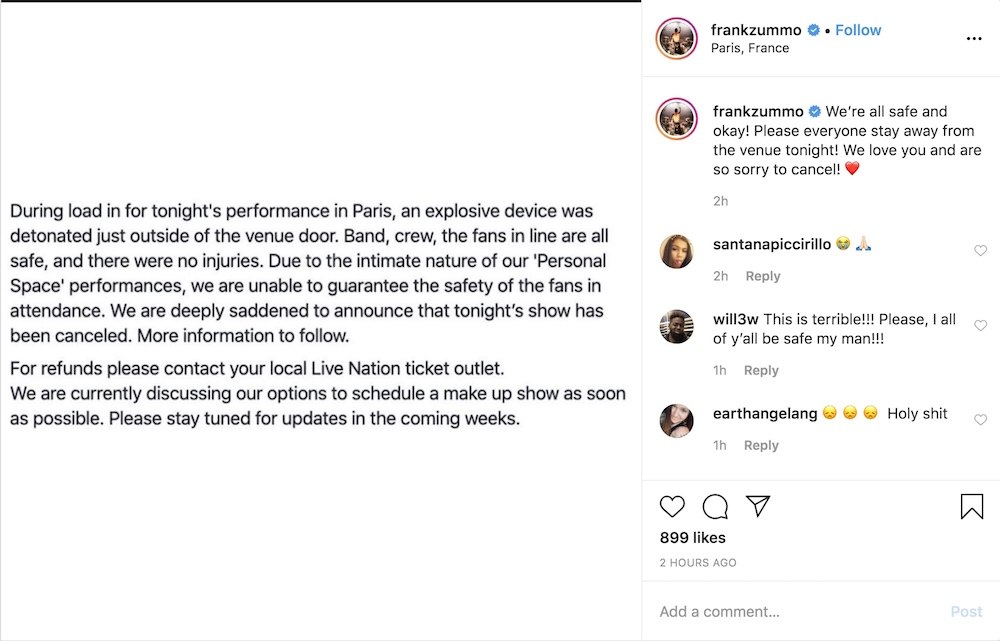 “Unfortunately, the Sum 41 show at Les Etoiles is cancelled tonight,” the new post reads. “All tickets will be refundable with your ticket sellers. Further details wil be posted ASAP.”