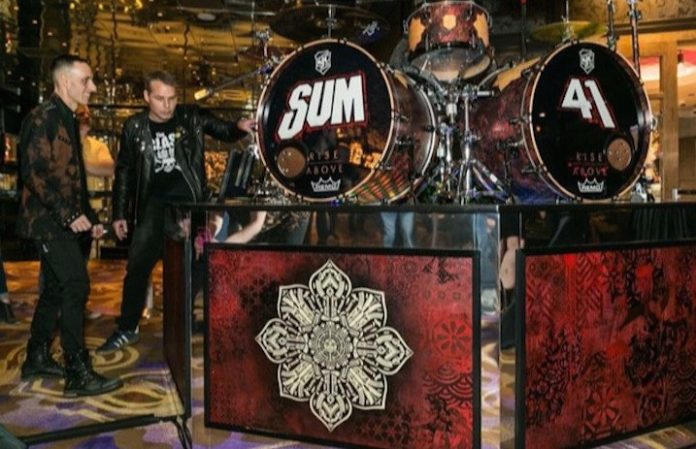 The one-of-a-kind, drum-kit-as-artwork piece—dubbed “Rise Above”—was unveiled by the music-and-design twosome on Friday, Feb. 16, along with SJC Custom Drums co-founder Mike Ciprari. An original SJC  Drums set, the instruments of percussion were utilized by Fairey to convey a specific message of unity, using dark organic patterns and three-dimensional woodgrain mandalas on each drum shell.

“The Rise Above art piece deconstructs guns and repurposes them from weapons into components of a mandala,” said Fairey. “There is a power in making something beautiful out of ingredients that are cold and threatening. I hope the 'Rise Above' gun mandala can be a metaphor for spiritual transformation toward peace and harmony.”

The artistic drum set has been used by Zummo on tour, including in his award-winning appearance at last year's Alternative Press Music Awards. See more photos below of Zummo and Fairey with Sum 41 band members Deryck Whibley, Cone McCaslin and Dave “Brownsound” Baksh.