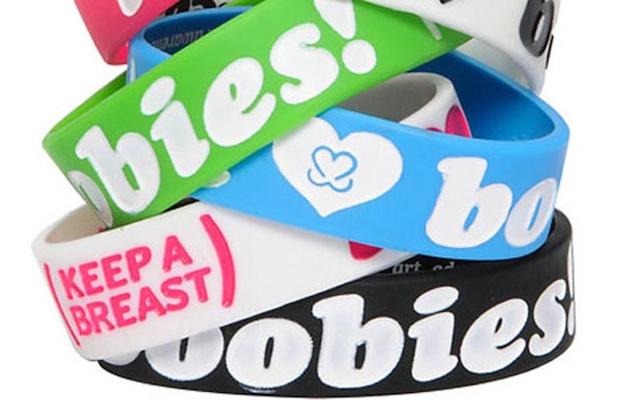 In an apparent victory for two Pennsylvania students who have been embroiled in a legal battle with the Easton Area School District board since 2010 involving the Keep A Breast Foundation's popular “I Love Boobies” campaign, the U.S. Supreme Court announced Monday, without comment, that they would not be taking on the appeals case.

We first brought you word on the issue in 2011, when a federal judge overturned the school's ban on the bracelets, which led to the suspension of students Brianna Hawk and Kayla Martinez, then in middle school, after violating the ban on Breast Cancer Awareness Day in 2010. The students, with the assistance of the American Civil Liberties Union, sued to school, asserting their right to free speech, and have been embroiled in a series of court battles and appeals ever since.

The school, for their part, argued that the bracelets were lewd, a stance that the court disagreed with in a decision that the school felt intervened with their ability to enforce policy within the district.

Court rulings have favored the girls, pointing to the fact that the bracelets caused no specific harm or disruption. Most recently, the lower courts' rulings were upheld in a Federal Circuit Court appellate hearing, prompting the school board to vote in favor of appealing the case to the U.S. Supreme Court back in October.

With the Supreme Court's newly announced decision not to weigh in on the matter, the lower court's ruling will be upheld, and the ACLU will pursue a permanent injunction against the school's ban. Though the two former students are now in high school, middle schoolers have, apparently, been wearing the bracelets on a daily basis.

Unfortunately, the lack of a Supreme Court ruling opens up the issue to reoccur and be reexamined by courts in other districts.

The Keep A Breast Foundation is the leading youth-focused, global, nonprofit breast cancer awareness organization, and “I Love Boobies!” is the foundation's signature breast cancer outreach and awareness program. According to the group's site:

“i love boobies! has successfully initiated a dialog among young people about breast cancer. It has proven to be a doorway to involvement in KAB’s other programs, and has brought the subject of early onset breast cancer to the national media. Revenues from i love boobies! cause merchandise has allowed KAB to broaden its reach and provide grant money supporting important studies.”

In their alignment with the music scene, and events like Warped Tour, Keep A Breast has become the awareness foundation of choice for many musicians who support the cause.

Have you ever been banned from wearing an “I Love Boobies!” bracelet? Let us know in the comments!