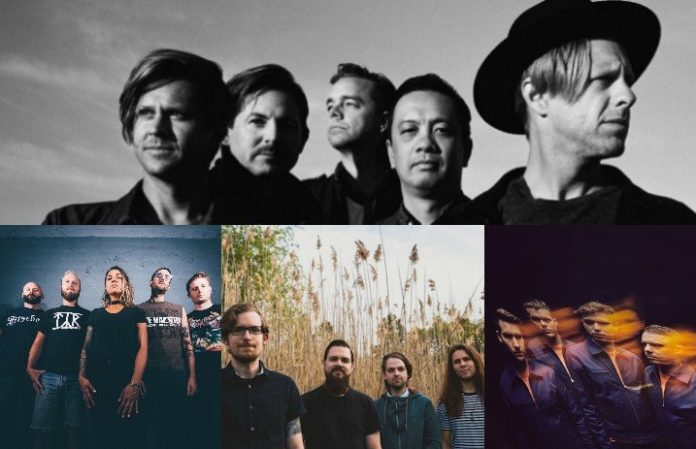 Watch new music videos from Harm’s Way—plus, don’t miss streams of new albums from Retirement Party and Light This City. Check out the news you might have missed today below!

We’re looking forward to playing at the BRO-AM with Colony House, Sure Sure and the 91X Battle for the BRO-AM winner. This is going to be an extra special hometown show for us. The beach is free, but there are a couple VIP Skybox Tables (new this year) and a few Suja VIP Pit tickets left. Grab them while you can! LINK IN BIO #BROAM2018

Switchfoot’s BRO-AM has announced the lineup for the 14th annual Beach Fest. The artists include Switchfoot, Colony House, Sure Sure and the 91X Battle for the BRO-AM. Beach Fest takes place June 30 on Moonlight State Beach in Encinitas. There will be various events at the festival, such as surfing events, vendors and more. The event will benefit San Diego and the youth in the community. There are a variety events during the week besides the Beach Fest, and you can find out more and purchase tickets here.

Even though Retirement Party are set to release their debut album, Somewhat Literate, on Friday, they premiered a stream on Brooklyn Vegan for fans to hear the album before the release. You can preorder your copy here.

Check out the video, the tour dates and

Flint, Michigan band Baggage are heading out on tour to celebrate the band’s bassist, Jonathan Diener’s, 30th birthday. You can buy your tickets here, and see the full list of tour dates below.

Metal band Light This City will be releasing their album on Friday, but it is available for stream on their Bandcamp page. The band will be going on tour this summer. You can get your tickets here and see the full list of tour dates below.

Nine Inch Nails added a handful of extra dates to the band’s Cold And Black And Infinite tour. The band will be headlining the Louder Than Life Festival in September, and added an extra date in both Washington, D.C. Oct. 10 and Chicago Oct. 27. You can purchase your tickets here.

Harm’s Way released a music video for their song “Last Man.” The band are going on tour this summer, and you can get your tickets here.

Everything Everything will be the lead headliner in Manchester’s Neighbourhood Festival this year. The festival will take place Oct. 6. You can purchase your tickets here and check out the full lineup below. More artists are set to be added to the festival at a later date.

8. Between You & Me released a music video for “Dakota”

The song’s off the band’s upcoming album Everything Is Temporary, out July 13.

Watch more: Anti-Flag talk about the music they just can’t listen to anymore