A look inspired by one of the Paramore vocalist’s many iconic hairstyles was featured on last week’s episode.

RuPaul’s Drag Race contestant Symone paid tribute to an iconic Paramore era on the reality show this past week.

Following the premiere, Hayley Williams excitedly reacted to the look on her Instagram story over the weekend. She sang Symone’s praises, saying it was the highest compliment that one of her hairstyles was recreated on the show.

Now in its 13th season, the show follows different drag queens as they compete to be the country’s next big star. Each week, there are new thematic challenges the contestants must complete before being judged by a panel, which includes RuPaul.

For this week’s episode, Henny, I Shrunk The Drag Queens, the remaining queens received some advice from Marvel star Scarlett Johansson. Following the chat, the contestants participated in a comedic sci-fi thriller acting challenge where they had to figure out how to ‘unshrink’ themselves.

The theme for the runway portion of the episode was Haute Pocket where Cynthia Erivo appeared as a guest judge. Symone, the stage name for Arkansas-native Reggie Gavin, did not disappoint. Many fans have also been naming her as this season’s Drag Race frontrunner.

She indeed took this week’s theme and ran with it, appearing on the runway in a full denim get-up with a gigantic zipper down her side.

“I decided to be Symone-in-a-pocket,” she said on the show.

However, the denim wasn’t the most head-turning thing about her look as she walked the runway with a gigantic red-orange wig.

Channeling the spirit of Williams during the Riot! era, Symone described her look as, “Very lead singer of Paramore, darling.”

She also went on to say the look is a tribute to emo youth.

“[The look is] really paying homage to the emo kids I hung out with in high school who allowed me to be gay, ol’ black Reggie, and they did not care,” she said. “This is for y’all.”

Whose lewk was your favorite of the night? 👠 #DragRace pic.twitter.com/dxNFmf18y5

As a fan of RuPaul’s series, Williams has even previously offered to send her hair dye Good Dye Young for a challenge after the U.K. show’s Twitter account made a Paramore reference.

As a result, Williams was overjoyed to see a look inspired by her on the iconic show and posted her praise of Symone on social media. 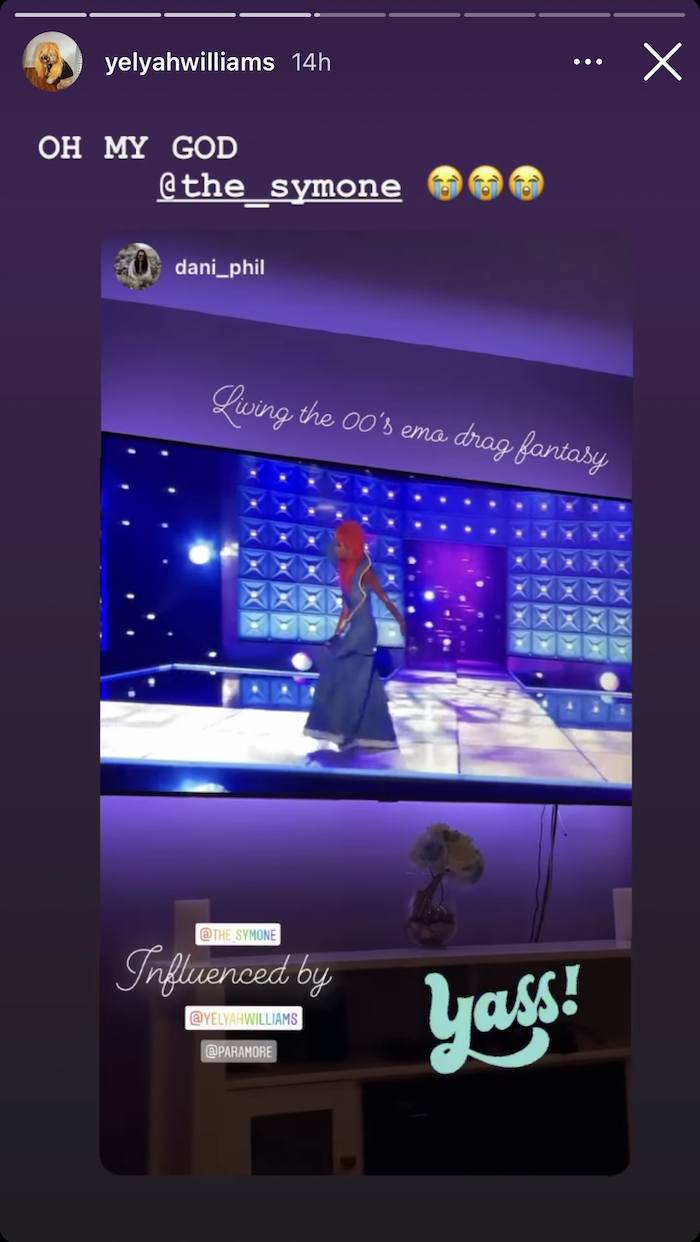 Read more: 10 women and non-binary pop-punk bands who are taking over the genre 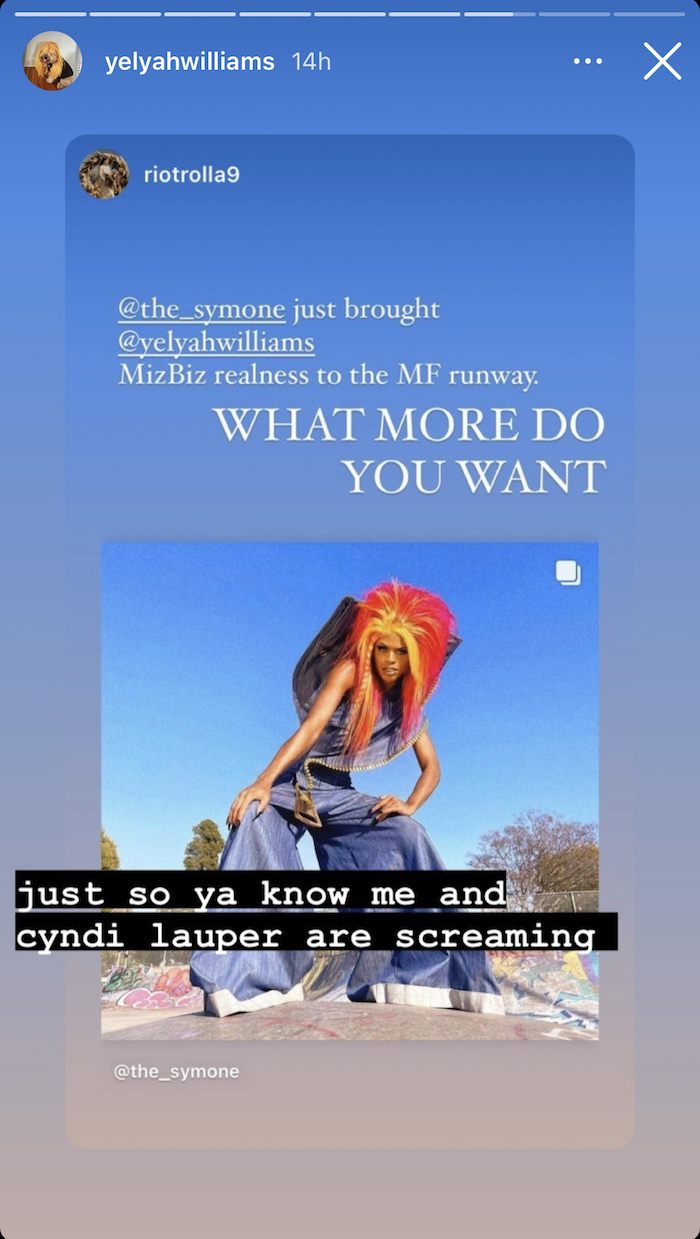 Williams also expressed how honored she felt to have one of her hairstyles recreated as drag. The singer reminisced how her stylist and Good Dye Young co-founder Brian O’Connor was the talent behind that iconic look, which later inspired the GDY shade Riot.

Read more: 10 albums from the 2000s that have no skippable tracks

“The fact that @colormebrian / @gooddyeyoung created a look for me that gets recreated as drag is the highest compliment. Holy shit,” the Paramore vocalist wrote on her Instagram story. 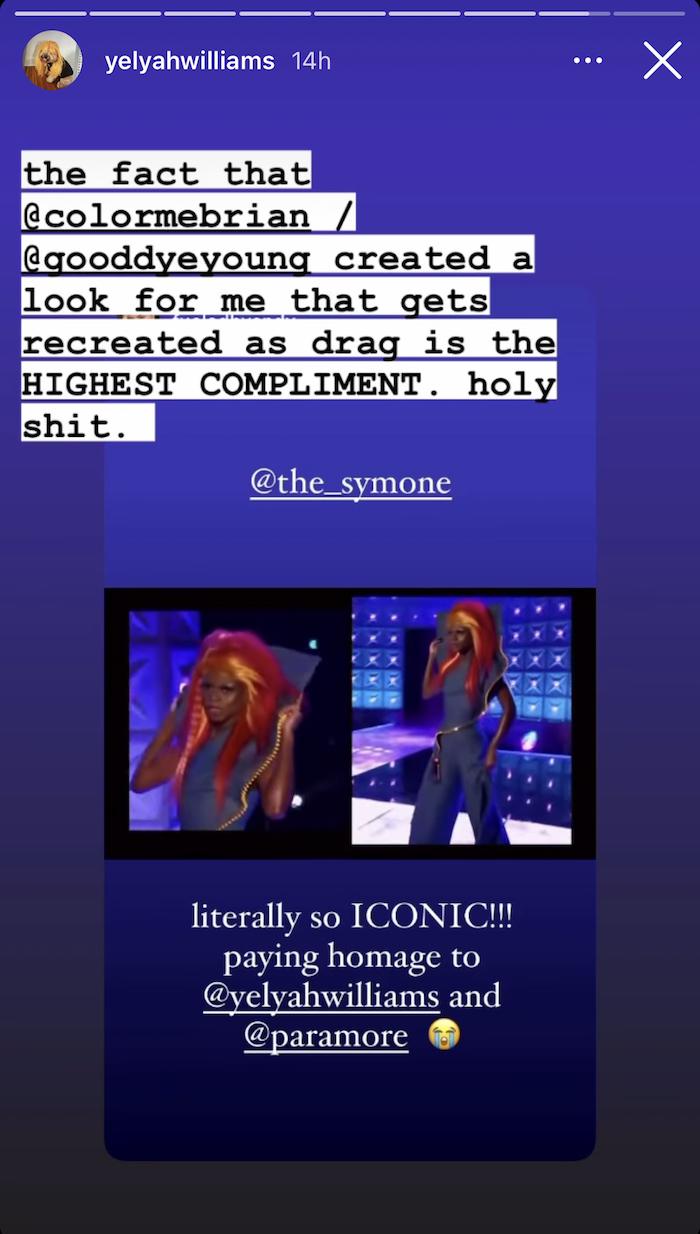 On April 6, Symone opened up even more about her legendary runway look on Instagram.

“Scene ‘Mone pumpin down the runway!” she writes. “It was so much fun to show this side of me. The scene/emo kids always accepted me when I was growing up, so I wanted to pay homage to them on the runway! Baby, y’all didn’t know til y’all knew, did ya? ?
???? #dragrace”

More on Paramore and Symone

This isn’t the first time Paramore have been featured on reality TV. In 2019, Paramore superfan Jess Guilbeaux appeared on Queer Eye where she showed off her tattoo inspired by the band’s song “Last Hope.” Later, Queer Eye’s Antoni Porowski was actually able to introduce her to some of the band. Soon after, Good Dye Young also helped her with a hair glow-up to celebrate her look.

Unsurprisingly, when Williams and O’Connor first launched their company, a Riot!-themed color was among the first products they offered. Since then, not only have they expanded their product selection, but they also partnered with Sephora, won an award for best vegan hair dye and donated a portion of their sales to various charities.

Paying tribute to iconic female celebrities like Williams is not new territory for Symone. She has channeled the spirit of women such as Lil’ Kim, Grace Jones and Beyoncé in her time on the show. However, one outfit in particular had an especially powerful message.

In the episode “Snatch Game,” Symone wore a leather dress adorned with red crystal bullet holes and a headpiece reading “Say Their Names.” Then, while walking the runway, she mentioned several victims of police brutality, including Breonna Taylor, George Floyd and Trayvon Martin.

This statement came after a year of protests, activism and mobilization following the death of George Floyd in police custody last May. In a video on her YouTube channel, Simone said the outfit was a way for her to take back her power and live her truth while paying respect to the many victims of racism.

“No matter how pretty or beautiful or non-threatening I—and Black people—seem, we’re still seen as a threat,” she said about the look.

RuPaul’s Drag Race airs Friday nights at 8 p.m. ET on VH1, and you can see Symone discuss her powerful look below.