Yes, Taco Bell is now selling a custom red wine to pair with your chalupa

The wine is available for a limited time.

Yes, it’s true. Taco Bell is now selling its own custom wine to go with your chalupa.

The fast-food chain has launched the new Jalapeno Noir wine to pair with its Toasted Cheesy Chalupa. However, the new beverage is available for a limited time and only some customers will be able to taste it.

In a press release, Taco Bell says the wine and chalupa duo is “irresistible.” The “rich taste and crunchy texture of the beloved Toasted Cheesy Chalupa complements notes of wild strawberry, cherry and beetroot in this silky limited-edition red wine.”

Some customers, however, won’t be able to try the Jalapeno Noir wine any time soon. The drink is being sold exclusively in Canada and arrives on Sept. 16. The wine was made at a vineyard in Ontario and is being considered a collector’s item. It has three unique bottle labels and costs about $19 USD per bottle.

As well, American Taco Bell customers will have to wait a bit longer to try the Toasted Cheesy Chalupa. The new item won’t appear on menus until November. However, for those wanting to try Taco Bell’s boozy concoctions in the United States, some Cantina locations do sell both food and alcoholic drinks. 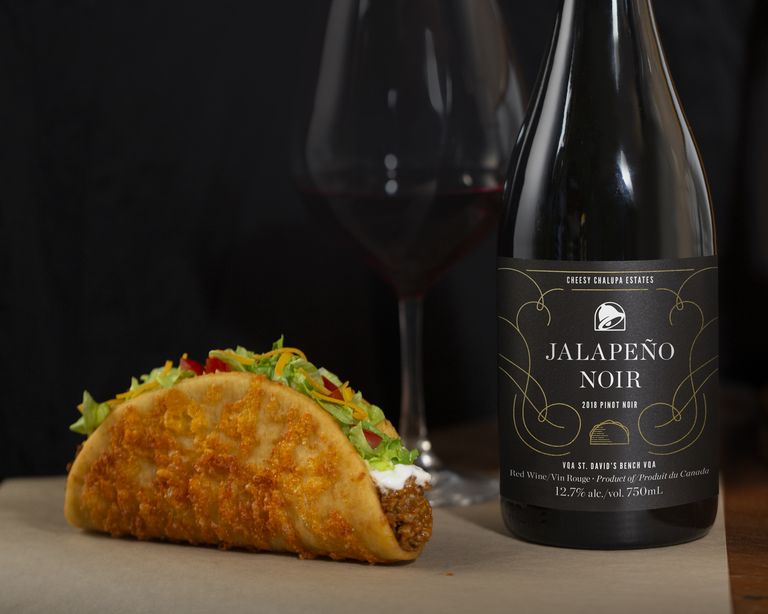 Some big changes have been happening at Taco Bell over the past few months. In July, customers said goodbye to some staple menu items including the Loaded Grillers, 7-Layer Burrito and all potato items.

Then, earlier this month, the company announced even more changes to its menu. Taco Bell revealed that it is revamping its menu even further to offset its carbon footprint and make room for future innovations.

Customers will have to say goodbye to a few more menu items starting Nov. 5. To start, the Mexican Pizza is leaving menus to help offset the company’s carbon footprint. Taco Bell claims that the Mexican Pizza packaging “accounts for over 7 million pounds of paperboard material per year in the U.S.”

The Mexican pizza being removed from Taco Bell is # 1 https://t.co/h7vYc71xoc

Despite the items leaving, the chain is introducing some new items this year including the $1 Chipotle Chicken Melt and Dragonfruit Freeze. Taco Bell assures that these latest menu changes are the last to happen in 2020.

Back in August, Taco Bell also revealed its going mobile. The company plans to build various “Go Mobile” locations specifically for cars and mobile pickup. The Go Mobile locations are to accommodate the changes in dining that have happened amid the coronavirus pandemic. They will include dual drive-thrus, priority pickup and app tracking that lets employees know when you’ve arrived to pick up your order.

Taco Bell taking away potatos but adding a signature wine is just not enough. You’re on the right track @tacobell but we’re not there yet.

TACO BELL IS PUTTING WINE ON THEIR MENU. 2020 CANNOT GET ANY WEIRDER.

At first, I was mortified that Taco Bell would be selling it’s own wine, but then I realized that it may be the nicest restaurant, that most of us will be able to afford, for the foreseeable future. pic.twitter.com/SmhGTksfas

Taco Bell is now selling its own custom wine in Canada, because that’s the kind of year it’s been.

Do you want to try the new Japaleno Noir wine? Let us know in the comments below.