Read more: Panic! At The Disco earn third platinum single from ‘Pray For The Wicked’ 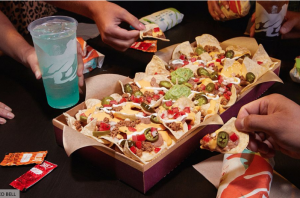 “For years, we’ve consistently proven that our vegetarian menu options are so craveable that even non-vegetarians unknowingly go veggie because they just love the taste. We’re committed to building on this insight and plan to further innovate in this growing space.”

Taco Bell was also the first and only quick-service restaurant certified by the American Vegetarian Association in 2015.

So go ahead and skip on down to your local Taco Bell and check out the new menu items. While you’re there, if you’re a non-vegetarian, try the Toasted Cheddar Chalupa. The taco has cheddar cheese baked into the shell. Are you hungry yet?

What do you think of Taco Bell testing out a gigantic nacho pack? Sound off in the comments down below!