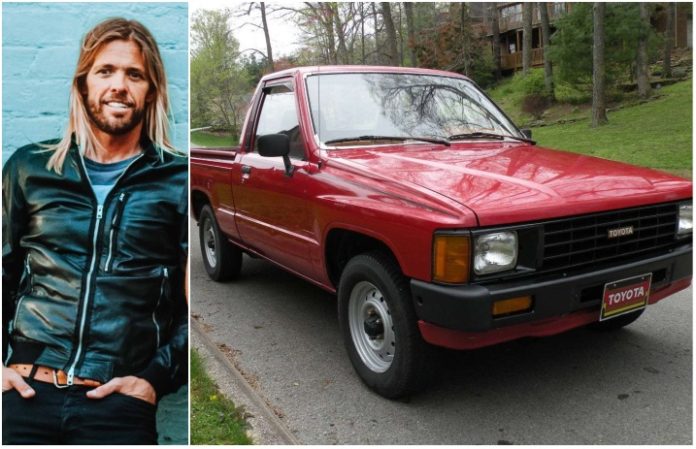 We're not quite sure how we missed this, but apparently Foo Fighters drummer Taylor Hawkins still has the same car he drove back in high school: a red, 1986 Toyota pickup. This, compared to Dave Grohl's sporty new Telsa!

The vehicular revelation comes from an interview the Foos did with Radio Hauraki; see the video sit-down below. While promoting their recent album, last fall's Concrete And Gold, Hawkins and Grohl were questioned about their daily drivers—and the results were (maybe) not what you'd expect.

Hawkins actually has two cars, his trusty truck and a reliable crossover. “[I drive] a Subaru Baja,” Hawkins said, as pointed out by Digital Music News. “It's from 2005. Subarus are… tough. They're hard to kill.” And you know the drummer loves tough cars because he literally still has his boyhood vehicle.

“I still have my old truck from high school, too,” Hawkins let drop. “It's a red Toyota, '86, 4×4.” But while the drummer for one of the biggest rock bands on the planet is tooling around in his '80s pickup and a dependable Subaru, Grohl is keeping up with the rockstar dream in his $135,000+ Tesla P100D.

“[It] goes 0-60 in 2.4 seconds,” Grohl said of his all-electric luxury ride. “It's the fastest car I've ever been in, in my entire life… And I'm sure that when people see me driving it, they're like, 'Wow, Dave Grohl is a fucking asshole.'”

Come on, Dave, we know you're not an asshole! But the disparity between a cutting-edge Model S and an '80s workhorse as two of the Foos' prime vehicles is certainly striking. Hmm, what do you think Pat Smear drives?

At least Hawkins doesn't begrudge his bandmate for his forward-thinking liftback. “Teslas are just fucking bad-ass,” the drummer added of Grohl's auto, before revealing that his “wife has one and it's like driving a fucking spaceship… There's nothing gnarlier than that car… and it really is the future.”

And all this time we thought the Foos preferred a white limo.