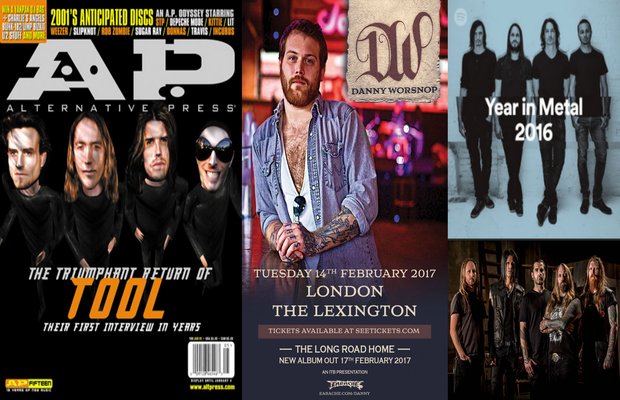 Read More: Born of Osiris announce ‘The New Reign’ anniversary tour, and other news you might have missed today

1. DEVILDRIVER will be embarking on their first headlining tour in three years!

The “Bound By The Road” North American tour will begin on February 8, and feature a slew of other heavy acts including Death Angel, Winds Of Plague, The Agonist, and Azreal. The tour comes in support of their latest release, Trust No One, which was released back in May. DEVILDRIVER have already made tickets available, and a full list of the upcoming tour dates can be seen below, with more to be announced.

Frontman Dez Fafara states, “DEVILDRIVER is heading out on our first headline run in over three years with a killer set list and full production, AND we are bringing some heavy bad ass bands along with us! Get your tickets early and come out with some friends, ‘cause this tour is going to be a monster banger!”

In what seems to be an unfortunate string of events, 73 members of the Team Rock family lost their jobs when the media group was forced to shut down after they “explored every option to secure the long-term future of the business.” But in a nice gesture, lead singer Ben Ward of the metal act Orange Goblin has set up a crowdfunding campaign to help the employees make it through the holidays. Writers and members of Metal Hammer, Prog, Classic Rock, Team Rock Radio and more have covered the rock and metal industries for years, and a lot of the hard work they've put in is similar to what folks over here at Alternative Press do. The link to their JustGiving fundraising can be seen here. The goal of the campaign was originally set for £20,000, but as of now, more than 1,600 people have contributed over £35,000.

“Today, 73 members of the Team Rock staff were told that the company is going into liquidation and that they are being made redundant with immediate effect with ZERO pay. These are good, hard-working, committed people that through Metal Hammer, Classic Rock, Prog Rock, TeamRock Radio and more, have supported the rock and heavy metal scene in this country for decades and now we, the rock community, need to pull together to help give something back.

Please spare what you can so that everyone may enjoy the festive spirit.” —Ben Ward

Read More: Twenty One Pilots open up on EP with Mutemath—“We had a blast doing it”

3. Tool will perform at the 2017 installment of Governor's Ball, marking their first New York show in a decade.

Per CoS, Maynard James Keenan and the guys will headline the seventh annual Governor's Ball Music Festival, and will make a rare appearance in the Big Apple for the first time since they toured in support of 10,000 Days. The festival will take place between June 2-4, and the full lineup will be released in early 2017. Tool, unsurprisingly, continue to work on their long-awaited new album, which they've already reported to have written many songs for, but also have said it that they intend for it to be perfect.

4. The guitar-playing video game Rocksmith has released a second set of Green Day tunes to play along to!

As a part of new downloadable content that is available this week, you can now play “Good Riddance (Time Of Your Life),” “Wake Me Up When September Ends,” “21 Guns,” “Bang Bang,” and “Longview” on Rocksmith! The guitar oriented video game allows you to play simple or advanced versions of the song, and teaches real tuning, notes, and chord progressions determined by the users difficulty setting. This is the second Green Day pack that's been released as DLC. The will be available on Playstation Network, Xbox Live, and Steam.

5. Spotify have released their “Year In Metal 2016” playlist.

The streaming company has compiled their list of 128 metal songs that they thought rocked this year, with quite a diverse playlist. Some of the notable tracks that made the list include “A Match Made In Heaven” by Architects, “Aggressive” by Beartooth, and “Trapped” by The Word Alive. There are a ton of other heavy jams on the list as well, so check it out below!

6. Danny Worsnop has announced an additional date in London for his solo run.

Touring in honor of his country record, The Long Road Home, Worsnop has provided fans with an additional date at The Lexington in London. The show will take place just a few days before the album's release on February 17. A link to tickets for the particular show can be found here.

LONDON! Another show announcement on top of the Leeds and Kingston events. Go buy tickets and shit! pic.twitter.com/GMeL6kQKZL

7. Asking Alexandria have release a live video for “Someone, Somewhere.”

Filmed by CaliberTV, a popular YouTube channel that covers live shows, Asking Alexandria have shared this live performance from the “10 Years in the Black” Sumerian Records 10th Anniversary Tour. You can check out the video below!