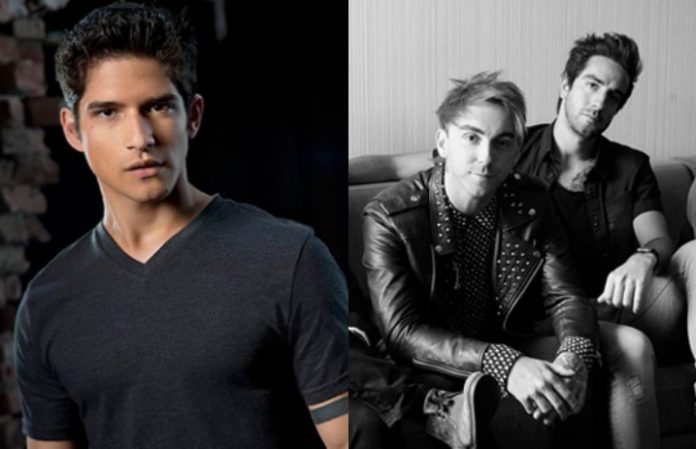 Today in things we didn't see coming: Teen Wolf star Tyler Posey is writing music with All Time Low guitarist Jack Barakat. These guys have a history—All Time Low pulled the actor up on stage for a performance at Comic-Con in 2015.

Posey actually has played in bands for a while, fronting Lost In Kosko until 2012, shortly after he got the role of Scott McCall on Teen Wolf in 2011.

Here's what he told Billboard:

“It’s so early in the works, but Jack from All Time Low, he and I have become really good friends over the past year, and just recently we talked about producing something with each other and writing music with each other. So we’re about to do something really big and, hopefully, do a collab with a bunch of other punk guys. It’s all punk. My whole life is punk. That’s all I want to do is be performing punk onstage, so it’s going to happen. Within the next year, I guarantee you.”

Actually, we probably shouldn't be that surprised. Posey performed on stage with State Champs in LA late last year!

Posey recounts to Billboard about growing up listening to Blink-182 and playing Green Day covers.

“[We] started writing our own stuff. I started taking it more and more seriously. I found a drummer. He and I would jam. We went to an open-mic night in our local town and started from there, eventually started recruiting more musicians and eventually started selling out the Roxy, which is a pretty big venue on Sunset Boulevard in Hollywood….So music is a huge part of my life. It’s the only thing I really focus on. I love acting and I love performing, but now some big stuff is about to happen with my music.”

Check out one of Tyler Posey's originals below. Are you excited for this collaboration? Let us know in the comments!

Watch more: 10 Things You Didn't Know about All Time Low