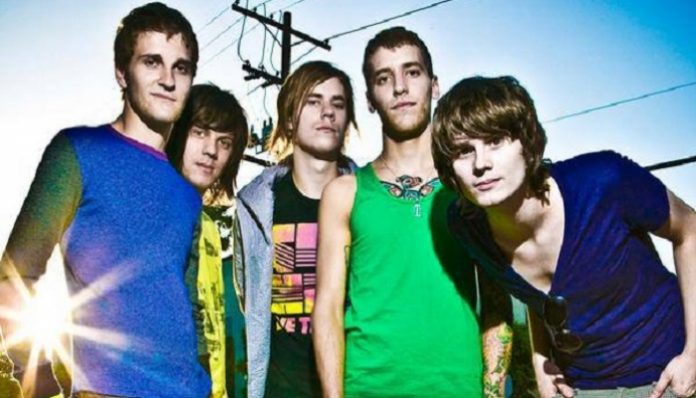 Back in February, the Academy Is… celebrated the 15th anniversary of their debut album Almost Here.

Now, Adam Siska has revealed that the Academy Is… intended to further celebrate the album’s anniversary this year. However, due to the coronavirus pandemic, those plans quickly changed. Despite this, Siska teases that another reunion could still happen in the future.

After dominating the scene in the early to mid-2000s, The Academy Is… haven’t performed together since their 2015 reunion shows. Then, when the 15-year anniversary of Almost Here arrived in February 2020, fans hoped for another reunion show.

The Beauty Bar in Chicago held an anniversary event for the album. However, The Academy Is… did not perform. Now, Siska has revealed that fans may still see the band reunite in the future.

This week, Siska shared a throwback photo on Instagram of The Academy Is… after their 2015 Riot Fest reunion show. His caption reveals that the band had hoped to further celebrate Almost Here with fans in 2020 before the coronavirus pandemic hit.

“TAI Reunion Show celebrating the 10th Anniversary of our debut album ‘Almost Here,'” Siska writes. “It would’ve been nice to celebrate its 15th with you in 2020, but the universe had other plans.”

Although this year’s plans have changed, Siska teases that a future reunion could still be in the cards.

“We hope to see you again some time if Fauci gives us the go ahead. Until then, thanks for all the good times. (Rock over London, Rock on Chicago- Wheaties, Breakfast of Champions).”

9.12.15- Riot Fest Chicago. TAI Reunion Show celebrating the 10th Anniversary of our debut album “Almost Here.” It would’ve been nice to celebrate its 15th with you in 2020, but the universe had other plans. We hope to see you again some time if Fauci gives us the go ahead. Until then, thanks for all the good times. (Rock over London, Rock on Chicago- Wheaties, Breakfast of Champions)

Back in 2005, the Academy Is… spoke to Alternative Press about the making of Almost Here, their debut full-length album. After signing their record deal, William Beckett and Mike Carden moved into a shared room in a Palatine, Illinois, apartment, where they spent three months writing Almost Here.

“A lot of [Almost Here] is about making the record,” Carden explains. “I think when I look at it now, it was a metaphor for our own pressure we put on ourselves. At the time, a lot of our friends weren’t taking these big chances. They were going to school and doing their normal thing, and everyone was frowning [at] us, going, ‘What are you doing? Why are you two shacking up together? What are you baking?’”

Almost Here includes the classic tracks “The Phrase That Pays” and “Slow Down.” The full album is available to stream below.

What is your favorite the Academy Is… song? Do you want to see the band reunite for more reunion shows? Let us know in the comments below.