Indie-pop quartet the Aces are back with their first release since their upbeat, widely adored sophomore LP, Under My Influence. “Don’t Freak” is a must-add to your summer playlists, as well as an important narrative following lead singer Cristal Ramirez‘s struggle with her mental health.

Not only is this an introspective track many people across the world can relate to, but it also serves as a song of advocacy as it arrives just in time for the start of May, deemed as Mental Health Awareness Month. Being unabashedly honest about mental health struggles and using lyrics to strip back stigma can make all the difference in the world, and the band are helping craft necessary change.

Read more: girl in red channels ‘The Perks Of Being A Wallflower’ in “You Stupid Bitch”

“When you struggle with your mental health, you start to realize very quickly just how little space is held for you in society. You quickly feel like a burden to those around you and end up thinking, ‘Why can’t I just get my shit together?’ constantly,” Ramirez shares. “Mental health issues are something everyone goes through, and not only do we need to be talking more about it, but we need to be holding space for it.”

In coordination with their release for “Don’t Freak,” the band are hosting a livestream event on their YouTube channel starting at 5 p.m. PST where they will share activities aimed at benefitting viewers’ mental health. Stay tuned to the band’s social media to see what you can bring to the stream.

join us to celebrate the release of DON’T FREAK tomorrow night at 5 pm PT !! we will be doing a livestream full of activities to help your mental health 🙂 stay tuned for details of what you’ll need to bring, can’t wait to celebrate with you 🌀🖤❤️ https://t.co/hybrbJYNA5 pic.twitter.com/zKnmqfI2FU

Check out the brand-new Aces track below, as well as an exclusive interview with Ramirez, who explains why mental health is important and how “Don’t Freak” came together.

What personal experiences helped inspire the deep lyrics in the new song?

I’ve struggled with anxiety for my entire life and recently [had] severe panic attacks that wouldn’t allow me to sleep most nights. There is a lot of shame around mental health struggles, and I have felt that really heavily this year.

How has your creative process grown since sharing Under My Influence to creating this track?

The pandemic has really changed us as artists and as a band. Taking a step back and realizing what is most important to us has brought out authenticity on a new level. It feels like the best version of the Aces yet.

Why is mental health important to discuss in your music, and what do you hope listeners take away from “Don’t Freak”?

Tell us about your experience on Exposure. How did this experience differ from other taped shows/performances you’ve done?

We had a blast! It was so much fun to challenge ourselves and try a new medium like a TV show, as well as to see what the artists could make in such a short amount of time. 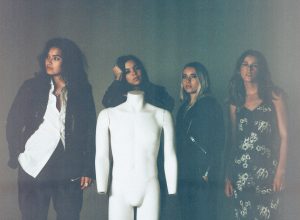 Read more: 10 mental health apps everyone should have on their phone

Beyond sharing their story of mental health highs and lows through enchanting guitar melodies, raw vocals and eclectic instrumentals, the band are also making their Hulu debut May 3.

Exposure premiered April 26 as the streaming platform’s first phone photography reality competition show, and the Aces will be featured on the show as subjects for the contestants.

8 photographers. One shot to win it all. 📸 Exposure premieres April 26. #ExposureOnHulu pic.twitter.com/sGBNhVCfQf

Alongside the band, established music photographer Matty Vogel will also serve as a guest star as contestants embark on two challenges with the band. The episode will also include a special performance of “Don’t Freak” as well as the beloved Aces track “Daydream.” Beyond the pride of winning the week, the best photographer of the episode is also the individual shooting the official single artwork. You can stream their episode, aptly titled Don’t Freak, right here on May 3.

More on the Aces

Don’t be fooled by the sunshine-y instrumentals and dance-pop energy that permeates the band’s discography, as they’re much more than just fun songs. Many tracks on the band’s sophomore release, Under My Influence, tackle deeper subjects regarding mental health, sexuality, growing up in a small conservative Utah town and beyond.

The band didn’t stop their album rollout on release day. They also released two bonus tracks in February. Ironically, they were the first two tracks the Aces wrote for their second album. “Aren’t You” and “Sleepy Eyes” are the “roots of this sonic chapter of the Aces,” the band say.

Optimistically looking toward the future, the band are ready to play their new album and single on tour dates across Europe and the U.K. in 2022. Tickets are available here.

If you or someone you know is struggling with mental illness, there is help to be found. Please consider these online resources and talk to your regular doctor about your symptoms