Funko has been absolutely killing it lately with their new figures, and their latest series of The Addams Family Pop! figures look incredible.

The new series of vinyl toys comes ahead of the new animated movie coming out next month.

Take a look below to see the full lineup of figures! 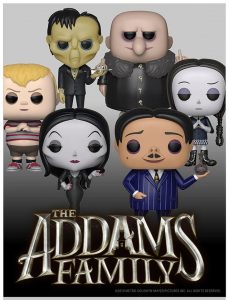 The new figures are available now and can be picked up here.

Earlier this year, more Addams Family Funkos were made available including a Morticia and Gomez Addams double pack. The pair were made as an Entertainment Earth Exclusive.

“They’re creepy and they’re kooky, mysterious and spooky, they’re altogether ooky, the Addams Family!” Direct to you from Cemetery Ridge, this marvelous Addams Family Morticia and Gomez Black-and-White Pop! Vinyl Figure 2-Pack – Entertainment Earth Exclusive comes packaged in a window display box, and each delightful figure measures approximately 3 3/4-inches tall. How can you live without them?”

Now you can really complete your collection with the full series.

More on The Addams Family

Last month, a brand new trailer for the upcoming film was unveiled showing the terrifying side of living in the suburbs.

This is the second trailer the film has dropped.

Back in April, the first trailer shows the iconic spooky family we’ve known for so long. However, besides just the animation itself, the film definitely has a modern twist. Morticia Addams even makes reference to Stephen King‘s It in the short teaser.

The new trailer shows the family having a hard time fitting into their new neighborhood. Their neighbors even appear to revolt against the family moving in due to all the trouble they cause. Check out both of the trailers below.

What do you think of the new The Addams Family Funko Pop! figures? Let us know your thoughts in the comments below.