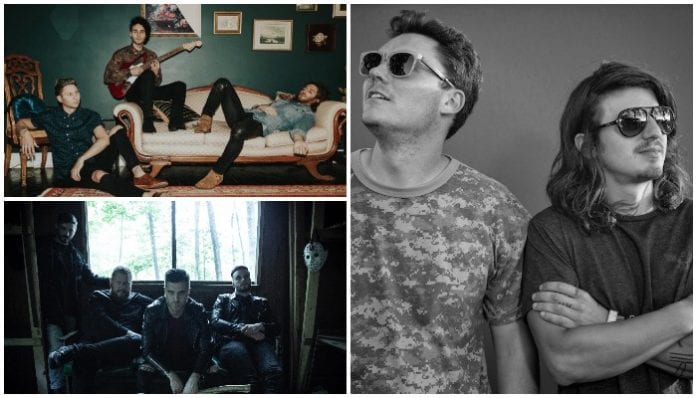 Foster The People announced a performance at Not So Silent Night—plus, don’t miss Ice Nine Kills’ new Halloween-inspired music video. Check out the news you might have missed today below!

Silent Planet released “The New Eternity” from their upcoming album, When The End Began. The track is follow-up to four other singles from the album, including “Northern Fires (Guernica)” and “Vanity Of Sleep.” Silent Planet plan to embark on a fall co-headlining tour with Stray From The Path. When The End Began is out Nov. 2 via Solid State Records, with ticket and preorder information available now.

Read more: This hospital playlist could save someone’s life, literally

Smallpools released “Social,” the second track off their upcoming EP SO SOCIAL. Frontman Sean Scanlon explains that “Social” is about someone’s fear of missing out versus his experience having been there. SO SOCIAL is out Dec. 7 and is available to presave on Spotify now. The band are also planning to tour in March, with a special EP release show in December.

3. Foster The People announced for Not So Silent Night

New York, we’ll see you on December 6 at @ALT923Radio’s ‘Not So Silent Night’ at @barclayscenter. Tickets here: https://t.co/gjd1QLLdJg pic.twitter.com/nijnGHEyyf

Foster The People announced they’ll be playing Not So Silent Night Dec. 6 in New York. Also on the bill for that night are Muse, Florence And The Machine and Death Cab For Cutie among others. Tickets are available now.

The Front Bottoms have released a new song titled “End Of Summer (Now I Know).” The song comes ahead of their tour with Manchester Orchestra in November. Check out a full list of dates below.

Capsize have announced The Burn Away Tour with Thousand Below and Dead Lakes, which hits several cities on the West Coast. The band also released a new single titled “Blind,” which is produced by From First To Last’s Matt Good.

St. Louis duo Ashland signed to Rise Records and released a three-song EP titled misc. The band explained that they wanted to bring misc to life, soo instead of creating music videos, they created visuals. Each song has a visual component that you can watch here.

Greek Fire released a cover of Cyndi Lauper’s hit “True Colors.” The song is piano-driven and will be featured on the band’s forthcoming album BROKEN, out Feb. 14. The album is available for preorder now via PledgeMusic.

Ice Nine Kills unleashed the video for “Stabbing In The Dark” off their new album, The Silver Scream. The music video is a tribute to John Carpenter’s Halloween. All of the songs on The Silver Scream are tributes to horror movie classics. The album is available now via Fearless Records, and you can catch the band on tour.

Read more: 12 times the new ‘Halloween’ makes a nod to the series

8 Graves released a new song titled “Bury Me Low.” The track tackles topics such as mental illness and depression, according to vocalist Brent Carpentier. “Dealing with my depression is a constant battle,” he says. “Sometimes I feel like I’m so used to fighting that even if I died, I’d crawl right back out of my grave in resistance.”

Stacked Like Pancakes just released their new music video for “Dreamcatcher,” their second single from their upcoming album, Strange Creatures. The new album will be available in March 2019.