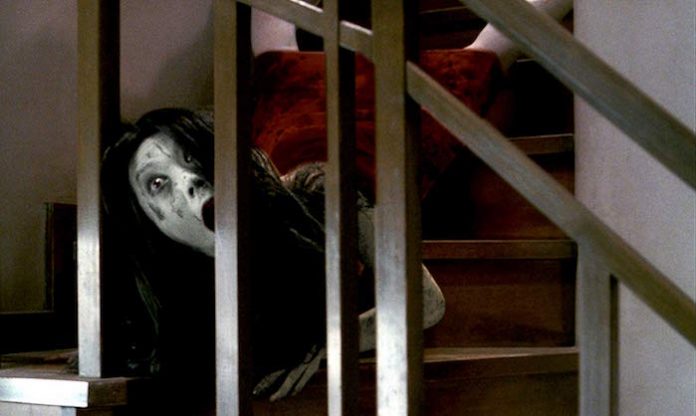 We have known that beloved horror movie The Grudge was getting a reboot in 2020, and now we have our first horrifying look at what the film looks like more than a decade later.

Entertainment Weekly has shared two exclusive photos from the movie that have already given us nightmares.

The Grudge originally released in 2004 and was a remake of 2002 Japanese horror thriller, Ju-on: The Grudge, which was written and directed by Takashi Shimazu.

While that film took place in Japan, the reboot will take place in America, but it will be set in the same time as the 2004 movie.

Now, the film is getting its reboot, because it’s 2019 and we apparently need a reboot of everything. However, when it comes to horror favorites, we can’t complain about all the new films.

The Grudge reboot is directed by Nicolas Pesce. The film centers around a cop named Mandy (Andrea Riseborough) in a town that has a mysterious case that she just can’t figure out. It leads to her a house that “has been grudged,” Pesce says, and all hell breaks loose.

“We follow her, as well as two other storylines, that are all interacting with this grudged house in small town America,” Pesce said. “Like the old films, it’s a tapestry of three different stories that interweave and all take place at slightly different times, centered around this one house that’s at the center of this case that this cop is working on.”

Pesce also noted that it isn’t just a remake of the 2004 flick, but will have a new storyline.

“The beauty of The Grudge franchise, both the American and Japanese iterations, is it’s an anthology series. Every movie is a different story of different characters having different interactions with this curse,” Pesce said. “In today’s age where we’re remaking everything, I thought it would be fun to dive into The Grudge universe where we don’t have to remake anything, but rather a new chapter in this canon.”

She also talked about why the grudge is a unique force because it’s “inescapable”.

“It’s not your traditional haunted house movie where you pull up to a creepy, Gothic-looking house and go, ‘oh god that’s haunted.’ A motif of all the films, especially this one, is that behind the most normal kind of house, inside the most normal-seeming life, there can be something horrifying — whether it’s real and grounded, or something otherworldly and terrifying, it can happen anywhere, behind any door, to anyone. It’s unique to this story and philosophically terrifying,” Pesce said.

You can see the two exclusive photos from the reboot here.

See the new face of horror in first look at The Grudge reboot https://t.co/tHlv7AbpLf

The Grudge will release in theaters on January 3. You can see the trailer for the 2004 film below.

How excited are you for this reboot? Sound off in the comments down below!