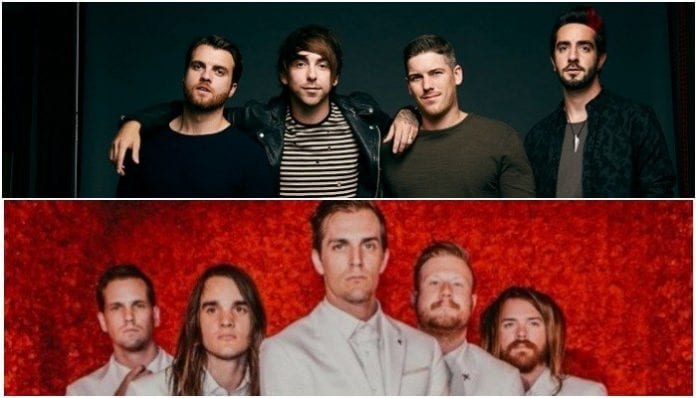 In a video for the Rave TV, All Time Low and the Maine decided to get together and answer a few holiday-related questions. Picking from a “cookie bowl” the bands go back and forth with questions and responses.

The interview discussed personal resolutions in the new year, Taco Bell, their least favorite Christmas carols and the age that they found out that Santa wasn’t real.

Immediately, the bands hilariously shoot sharp quips back and forth at one another.

“We decided to combine two of America’s biggest bands to do it,” Jack Barakat says of the interview. Of course, in typical Alex Gaskarth fashion, the band’s vocalist didn’t let the joke die.

Following their interesting introductions, the Maine kicked things off by asking the members of All Time low a question first. While the interview itself was holiday-themed, the guys waste no time to tie in personal humor and anecdotes.

Watch the two bands interview each other below.

Aside from sleeping 12 hours a day, as revealed in the interview, All Time Low intend on taking a little bit of a break in 2019, as previously reported.

While the band will be taking a much-needed breather, that doesn’t mean we won’t be hearing from them at all. The band will be performing alongside NOFX, New Found Glory, Waterparks, Story Of The Year and more at this year’s Slam Dunk Festival.

Additionally, the Maine is gearing up to play 8123 Fest alongside Mayday Parade, We The Kings, and Real Friends.

What do you think about the bands interacting with each other? Let us know in the comments below.