Back in February, the Offspring announced their first full-length album in almost nine years with its title track “Let The Bad Times Roll.” Now, they are back with a chaotic new visual for the single and let’s just say things get a little… strange.

Along with talking toilet paper, giant cockroaches and violent scorpion cell phones, the “Let The Bad Times Roll” video offers a satirical perspective of the world we’re all living in today.

“Let The Bad Times Roll,” which was written in 2019 and recorded last year, is a reflection of the ongoing challenges both America and the world are facing. For singer Dexter Holland, the punk rock track represents the lack of action people in power are taking these days.

“I feel like we’re in a unique period in history where instead of our world leaders saying ‘we’re doing our best’ it’s more like they’re saying, ‘fuck it,’ and it’s really scary,” Holland says in a press release.

Now, the Offspring are expanding on these thoughts in their trippy new video for “Let The Bad Times Roll.” The visual slightly mirrors the experiences the world has gone through amid the COVID-19 pandemic as it follows individuals quarantining inside their homes.

However, the video’s stars don’t just binge-watch Netflix or order Postmates. Instead, they come face-to-face with demonic versions of everyday objects such as exploding cell phones and laser-shooting kitten screensavers. Additionally, one individual even faces a mob of violent clowns as they destroy all of the belongings inside their house.

Eventually, the wild “Let The Bad Times Roll” visual comes to a close as a swarm of virus cells begins to fill the air. Everyone quickly searches for anything that will cover their faces from the mutant cells such as a practical water jug, scuba goggles and even a shoe. However, they all succumb to the strange symptoms the anthropomorphized cells are carrying in a truly unsettling ending.

Before the video’s premiere on Thursday, Holland and guitarist Noodles held a virtual YouTube Q&A livestream with fans. Holland exclusively told Alternative Press that seeing all of the different reactions to the video from fans around the world was truly something special.

“The great thing about these live streaming events is that you can see how truly worldwide your event is. We had fans chiming in from every country you can imagine,” Holland exclusively told Alternative Press. “The comments started scrolling so fast, we could barely read them! We were blown away and can’t wait to do it again soon.”

The “Let The Bad Times Roll” video is available to watch below.

This latest single offers just a taste of what’s to come from the Offspring’s new album Let The Bad Times Roll, which arrives April 16. Earlier this month, Holland revealed to radio host Lou Brutus how the Offspring came up with the title for their upcoming LP.

“We had a song two albums ago [on 2008’s Rise And Fall, Rage And Grace] called [‘Stuff Is Messed Up’],” Holland says on hardDrive Radio. “We wrote that ​because we thought how terrible things were in the world back then,  but it actually got worse. So we had to come up with a new title: Let The Bad Times Roll. You can apply it to a lot of things. I mean, we’re not a political band. Some people would apply it to the last administration. Some people would apply it to things that are going on today or just how messed up everything is, trying to fix our pandemic and all that kind of stuff.”

Although the release date for Let The Bad Times Roll is still a few weeks away, the Offspring already have a slew of tour dates booked in 2021. In June, they are set to play Prague Summer Festival, Moscow’s Park Live Festival and Jera On Air. Additionally, they are performing alongside headliners My Chemical Romance and Metallica at Aftershock Festival this October.

Earlier this week, the Offspring also added an additional acoustic in-store performance at Banquet Records after their first date quickly sold out. Now, they will be playing at both 6 p.m. GMT and 9 p.m. GMT Dec. 3 at Banquet Records in Kingston upon Thames, England. Tickets for the second performance go on sale March 26 at 11 a.m. GMT and are available to purchase here.

Our UK in-store shows sold out so quickly that we’ve added a second show at @BanquetRecords on Friday, December 3rd at 6pm.

Tickets go on sale this Friday, March 26th at 11AM GMT. https://t.co/gXLL2E4f5U pic.twitter.com/YekbHG3N2n 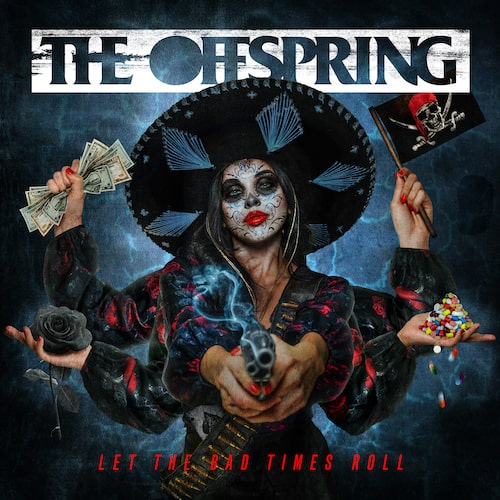 The full list of the Offspring’s upcoming tour dates is available below and more information can be found here.

What are your reactions to the Offspring’s “Let The Bad Times Roll” video? Let us know in the comments below.